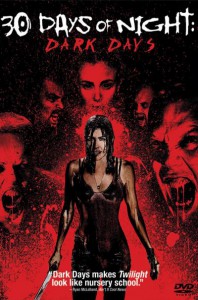 Don’t look behind you…

If ever was a film that sounded so much cooler than it was – it was the original 30 Days of Night (30 DoN). Come on, take a small town so remote and so far North that it doesn’t see the sun for a whole month, then have it placed under siege by vampires? And not just Team Fucknuts vampires, honest to goodness vicious fuckers with angular offputting features and the desire to drink your blood – not just your will to live!

But not far enough off course that they canned a sequel, albeit a direct to DVD featuring exactly ZERO original cast members!

With Josh Hartnett and Melissa George long gone (in Hartnett’s defence he was toasted at the end of 30 DoN) a new actress comes in to play George’s character Stella – I’m not naming her as it isn’t important and I can’t be bothered looking it up.

Stella has taken her experience in Alaska public but far from rubber wristbands, songs written by quasi celebrities and musicians trumpeting the cause she is mocked and ignored by a disbelieving public – which makes me curious why there is a jam packed house when she gives a speech about her experiences.

The audience listens intently and then cruelly teases her to show their derision – until Stella announces to any vampires in the audience that she has a surprise in store. The audience sits puzzled wondering who if any among them might be real vampires:

Shortly after this very public unveiling it seems that somehow people still don’t believe Stella, all this despite the spontaneous combustion of three of her audience when exposed to bright light. The public apparently feels it was a publicity stunt.

Upon returning to her hotel room that night Stella flicks on the light to find 4 people sitting silently in the room looking at her – sure it’s a novel scare used time and again in films but let’s look at this logically:

You walk into your own home / hotel room expecting nothing more than your own stuff and $12 bags of chips and there are three complete strangers sitting there with the lights off, just staring at you. Any questions?

How long were they there sitting in the dark?

Were they talking amongst themselves in complete silence?

Why not sit near the door and wait for Stella?

Wouldn’t it be nicer to leave a note on the door “Care; people have broken in to your room and are sitting in the dark inside… we mean no harm though”.

Anyway the heart of the matter is that the three interlopers all had their lives impacted in negative ways through unwanted vampire interaction. Abandoning the political talk vampires ate their friends and family. They need Stella’s help for no other reason that I could fathom aside from they wanted to recreate the cover of Left 4 Dead 2. 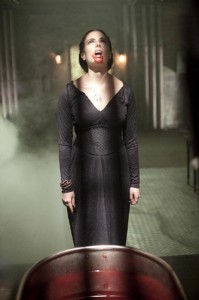 “And this dress is from our Executive Vampire collection.”

But they claim that they need her to help hunt the vamps during the day and ultimately kill off the lead vampire named Lilith, (who as well as having a name that sounds quite folk singerish she dresses and looks just like one too – aside from her big fangs that is… but I’ve never seen Norah Jones up close, maybe she has them too?) before Lilith and co set off to suck another remote town dry – so I guess this film could almost be called the Paris Hilton Diaries.

Throw in a human-friendly vampire who lives exclusively on pre-bagged blood (THAT’S why Red Cross are always asking), a vampire friendly human, some big fucking guns and some dodgier than dodgy CGI and we’ve got a direct to DVD movie.

The rest of the movie follows the foursome as they carry on their hunt, though judging from the skills displayed in the first hunt they can’t have been training for long. Take the example where a human gets bitten by a vampire – and when he turns shortly after everyone acts surprised. Talk about rookie mistakes.

As time goes by Stella and one of the gang Paul learn to rely upon one another, relying on each other particularly hard in a bathroom in one scene, as their attraction grows.

The vampires seem to have a default facial expression that I would best describe as “curious and puzzled”, and they jump in and neck away when the situation demands, and hang around menacingly when it doesn’t.

Being a low budget outing the bulk of the film is set in abandoned factories and the finale takes place on a ship, in lieu of real scares they utilize the “lean in everything is getting quiet… BOOO!” technique relied upon by dozens of PG 13 “Horror” films. The best compliment I can give the film is that they didn’t fall victim to mindless use of slo-mo and 57 shitty alt-metal songs to pad out the film and the soundtrack.

30 Days of Night – Dark Days is exactly what you think it will be, some vampires, some blood, a little sex and quite a few F bombs to fully use the MA rating, with nothing particularly memorable or impressive about it.

In that vein (get it?) it’s the perfect disposable 2nd DVD rental. The first is the one you REALLY went to the store to get, the 30 DoN is the one you’ll get to if there’s time.

Final Rating – 6.5 /10. Not bad for low budget filler, as good as could be expected anyhow.