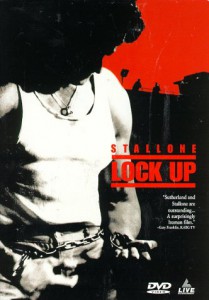 There is no whiz bang story behind why I chose to watch Lock Up, I simply walked along the DVD aisle and spotted the cover. Remembering enough to know that it was at least OK I threw it in the pile to tote the requisite number of DVDs to justify a deal at that particular store. (I always end up nearly panicking and throwing any old thing onto the counter just to get up to the magic number, normally 5 or 7. This final DVD is generally the worst in the bunch by farrrrrr, even if you only throw it on for the hint of boobs on the cover. (Fingers crossed!)

Warning: This whole thing is so formulaic they might as well have called the “One guy in prison vs the system” movie genre after it.

Frank Leone (Sly Stallone) is a nice guy in prison for a crime that he apparently actually did commit!  But don’t worry it wasn’t a violent one. He is due for release from the minimum security prison soon to be with his missus, with whom they share a stupid hand gesture so pathetic that I felt like slapping the TV every time they did it, then slapping myself for doing something so stupid as slapping a TV. Whatever, it serves no purpose in the film but to shit me.

One night near his release date Frank is unceremoniously moved into a maximum security prison. Frank has no idea why, but seriously why worry about these things? I’m sure they filled out all the necessary paperwork! And really who are you to cast aspersions at the integrity of the justice system? These guys have really tough jobs and they don’t need you sitting in the background second-guessing every move they make!

YOU KNOW YOU ARE JUST THE SORT OF PERSON THAT CRIES JUST BECAUSE AN INNOCENT MAN IS KILLED FOR NO REASON IN COLD BLOOD!!

It turns out that then new nasty Warden (Donald Sutherland) and Frank go way back, all the way back to a time when Frank escaped from one of his prisons, and he is pissed and determined to make Frank’s last six months a living hell. John Amos is the hard-nosed (flat nosed too, seriously look up one of his pictures!… That hand gesture again. It’s in my mind every time I think!) head of the  guards who has “Make Frank’s stay unpleasant” as one of his KPIs.

He plays football, not the tough Australian version but the padded up ‘one play at a time’ version that only Americans can understand. He also fixes cars and gets into fights, guy shit. (The fixing cars thing only justifies a “using tools with our muscles montage” that could serve as the inspiration for a million gay pride parades.

The bad guys try various torture methods to make Frank crack, including torture, and Frank simply wants to get out to see his Missus and do the hand thing one more time…

AHHHHH THE FUCKING HAND THING IS TEARIN’ ME APART!!

Final Rating – 6.5 / 10. This was made in the era where Stallone could make a film about anything and make it inexplicably (yet only mildly) entertaining. The man made a film about arm-wrestling truck drivers tolerable! Lock Up ticks everything in the prison movie playbook and is a reasonable couple hours.

While I try to throw a joke or two into proceedings when I can all of the opinions presented in my reviews are genuine. I don't expect that all will agree with my thoughts at all times nor would it be any fun if you did, so don't be shy in telling me where you think I went wrong... and hopefully if you think I got it right for once. Don't be shy, half the fun is in the conversation after the movie.
View all posts by OGR →
This entry was posted in Film, Movie Reviews, Sly Stallone, The Grey Area. Bookmark the permalink.