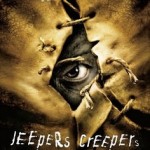 Most profitable horror movie franchises revolve around a primary threat, either a killer psycho, monster or other variety of nastiness. So you would assume that most writers attempting to create a scary movie spend most of their initial effort in coming up with an original and effective bad guy.

That seems to be the case here, without too much in the way of spoilers the killer is an amalgam of everything that it has devoured over the years, including man, animal and seemingly plantlife. Whatever aspects that victim had appear to be inherited by the “Creeper”, including it would seem the ability to fly, drive and regenerate health (maybe he killed a video game character).

I have ignored this at the video shop for some time and only grabbed it after I saw it on a couple of “all time best of horror” lists, now that I’ve seen it I know that I don’t have to pick it up next time.

The 30 second plot: Every 23 years for 23 days the creature appears to feed. 2 kids are going home for the holidays and basically they come across the creature and for the remainder of the film he hunts them down.

The kids are Justin Long and Gina Philips as Patricia and Darry, brother and sister, up until when they are run off the road by some maniac in an old truck they act like typical siblings, verbally sparring and trying to one up each other by putting the other down.

After the creature appears everything falls into lockstep with other typical horror fare, mobile phones get no service, gears stick so cars won’t go, torches don’t work, crazy ladies show up for little reason and cops yell “stop” instead of shooting what is obviously not human. One crazy lady in particular is almost solely responsible for informing the viewer of what has happened (and also what will happen).

I could go through other basic plot points but in essence it’s “Bad guy chases kid”.

There is a surprisingly low head count in this film, in fact the first kill is half way in, and I didn’t count while watching but it must be 5 or less on screen, and there really isn’t a great deal of gore apart from one scene, where the violence is cartoonish anyway.

I am baffled as to why this is in any Top anything lists, suspense is low, nothing original happens and the creature isn’t especially menacing or scary. The creature even has his own theme song that is supposed to forebode his appearance!

The film obviously wanted to be a horror version of “Predator”: creature appears to feed and takes victims as trophies or in this case food. It is almost indestructible, can regenerate itself and can travel quickly and easily, I think the director wanted to set the Creeper up as a Jason/Freddie style anti-hero but I just don’t see it.

Look, if you’re under 20 and think Freddie or Jason are what horror is all about you might like this, similar to “Mimic” (a better film than this, still not great though,) I just wonder why nobody thought to try Black Flag on a buggy creature to get him to run back under the fridge.

One thing I might note is that at least through the movie the director shows he has some neat tricks which at least look cool, even if they add nothing to the plot. A scene where they show the interiors of two cars following each other without a cut is pretty nifty.

Final Rating – 6.0 / 10. Better than anything Jessica Simpson has done, but so are an awful lot of things. Maybe for your next slumber party? 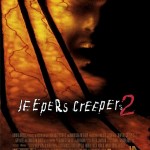 Call me a sucker for punishment if you like, but this was a genuine coincidence. I watched the first film a few days ago and had no intention of bothering with the sequel, but then last night the footy finished (Geelong by 2 points in a thriller) and before I had the chance to shut off the TV and head to bed the opening credits rolled and I realized what I was watching when in the first minutes the following appears onscreen:

It’s probably not a good sign when the entire plot of the original flick is encapsulated in 10 simple words.

Now there is a basic rule with most cash in sequels: Give ‘em the same, but more of it, and while this is the case here, it also isn’t. (I’ll explain later.) This film has basically two streams, in the opening scene we see a young boy rigging up scarecrows in the family cornfields, his Dad and older brother work nearby. After a minute the dog starts barking and one of the scarecrows moves, and when I say moves it leaps off the stand and takes the boy away.

The scene was fine until I realized something, anyone who has seen the first knows the Creeper can fly, is immensely strong, almost indestructible and only has 23 days to feed, why fuck around pretending to be a scarecrow? A simpler and more effective plan = fly in, grab who you would like to eat, fly off.

The second stream involves a bus full of high school kids returning from winning the state championships, though they never say which sport, at least cheerleaders are aboard. As the bus goes past the camera we are told this is the 23rd day, so you immediately know “Heeeeeeeere’s LUNCH!!”

Of course then the bus suffers a …. ahem flat tyre, and it is evident that it was no accident.

Meanwhile, back at the cornfarm. The father seems (understandably) catatonic that his younger boy was taken by a flying inhuman creature. We cut to a short scene where he and his surviving boy decide to A-Team up the farm ute.

Back at the bus, the adult supervisors decide to keep on moving one tyre short, just at a slower pace, only once again “Kapow”, there goes another tyre and they are resigned to the fact that they will be offroad from here on in.

Within minutes: BOOM! (Coach) – BANG! (Driver) – CRASH! (Manager). There go the adult supervision and the kids are trapped alone on the bus, knowing only that bad things happen if they get off. Shortly afterwards, one of the cheerleaders has a feinting spell, and while under she envisions previous victims and the back story of the Creeper. I thought this was a lazy exposition technique in the original, but doing the same thing again is just lazy.

On a sidenote, “Psychic Cheerleader” surely should be its own movie. (That’s a freebie Hollywood.)

So Dad and son, still on their vengeance mission hear a distress call from the bus and are on their way, and they inevitably join forces to try to ward off the Creeper. It turns out that our Creeper buddy is targeting specific people for specific parts. Woooo scary, I just thought he was hungry?

Enough plot, it’s paint by numbers teenager-targeting horror all the way from here.

We get far more close ups of the Creeper in this one, and the makeup job is quite good but not the least bit menacing or scary. The CGI isn’t too flash but is serviceable, and there is one scene where the Creeper takes a bit of damage and performs some on the fly maintenance which isn’t terrible, although the decapitation effect that justified the change was shoddy.

Now I mentioned that sequels generally ramp up the everything, and that sorta applies here. The disclaimer is though, that as the first movie was so tame, with few kills, precious little gore and no nudity, that slightly more is irrelevant.

Movie posters and DVD covers are required by law to have consumer warnings on the cover, you know “Adult Themes”, “Strong Horror Violence” and the like. Well I would like to put forward a motion to introduce new disclosures that give experienced horror fans a realistic idea of what they might expect, for Jeepers Creepers 2 I would require DVD distributors to have this on the cover:

PG13 – No Cool Kills. No Worthwhile Gore. No Nudity.

Add to this the fact that there is not a single attempt at a joke through the whole film, and we are left with the realization that this movie provides no reason for us to pick it up off the shelf to turn it over and read the back, let alone rent the sucker.

Final Rating – 5.0 / 10. I didn’t like the first one and even though they tried harder here I was even less satisfied with this one.