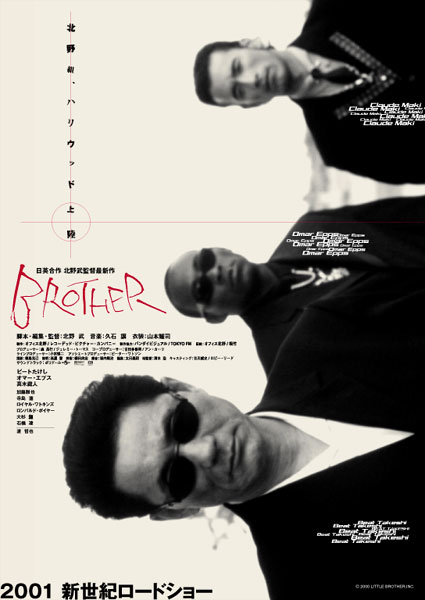 The director of this film is Takeshi Kitano, the star is Beat Takeshi… or vice-versa. But they are both the same guy, he acts under one name and directs under the other for some reason. I could care less what he calls himself, Brother rocks.

The plot concerns a loyal Yakuza henchman named Aniki who is forced to leave Japan when his Boss is killed and he refuses to kowtow and join a rival gang. He is sent to America where he looks up his younger brother who has gone off the rails a little bit. Not joined-the-Yakuza path, but dabbling in minor drug dealing and stuff.

Aniki (means Big Brother in Japanese) promptly takes over the rabble and forms his own gang of 5. Not content with running his own small time show he promptly sets about an expansion program that would leave his shareholders giddy (if they existed). Only like the dot-com boom and bust Aniki operates in a field with many competitors and precious few behavioral boundaries, so this was never going to end happily.

What sets Brother apart from the usual drug wars’ films is that it isn’t made like one. There are long dialogue-free scenes that are allowed to roll out and develop at their own pace, only to be punctuated by sudden acts of great violence, and not the “guy leaps into air after explosion” violence, I mean “guy gets chopsticks forcefully pushed into skull” stuff, or “man picks up broken bottle and sticks it in other man’s eye”.

Aniki himself speaks no English upon arriving in the US, so his instructions are passed down through his little brother and eventually his 2IC Kato that followed him across from Japan and shows unwavering loyalty at all times. Aniki grabs himself a girlfriend, although it is never shown if she is actually his platonic missus or a trinket (or even a pet) that he likes around, and his best friend in the gang is Denny (Omar Epps), a young thug and the unfortunate recipient of the broken bottle mentioned above. The two bond over gambling on anything and everything, despite not speaking each other’s language, and it seems that Aniki wants to take Denny under his wing from almost Day 1.

As the “business” expands it takes over new turf and incites anger from new enemies and rivals. Everything is run with the Yakuza code of honour and disloyalty and betrayal are both met with savage repercussions. Unfortunately if there is one thing that the Star Wars prequels showed us (aside from knowing when to stop) it is that “there is always a bigger fish”. Ultimately the gang grows too big and a mad scramble is made to flee as the tone changes.

It is hard to discuss Brother without making it sound like a whiz-bang action film, it isn’t that though. It has action elements sure, but maybe 4 brief scenes in the movie, a far cry from your Lethal Weapons and co… Brother is more a deliberately paced drama that tells a familiar story, but in a different way and with an unfamiliar backdrop.

For some reason I found it compelling at all times, even in the slow(er) spots when it seemed to pause for no reason, and I wanted it to continue on and on. I’ve seen Brother maybe 5 times now, and each time I pick up the DVD cover I know how great this film is, but I press play and let the following 2 hours prove it to me again.

As bat-shit crazy as some aspects of Japanese culture are these days, there is a lot to admire about the way they conduct their business at times, even in a violent crime film (and I am no Scarface / New Jack City slack-jawed admirer of criminals).