The Prophecy 3: The Ascent (Review) 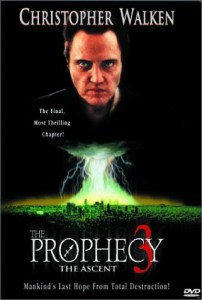 The Prophecy rocked, the second was an unexpected quality follow up, so what’s wrong with The Prophecy 3: The Ascent? Well nothing really, but there is so little new stuff that it comes across as a pale facsimile of the first two films. At least the filmmakers seemed to realise this and didn’t try to stretch it our unnecessarily by putting in pointless subplots and scenes, this is a pretty merciful 80 minutes.

Get in. Tell story. Get out.

At the close of the second film Valerie was “Knocked up by an Angel”, which sounds like the logical follow up to the old “Touched by an Angel” TV show, but apparently is unrelated.

She is toasted – literally – in the first scene here, but apparently her young child named Danyael survived, although the second scene throws that on thought its ear as he is gunned down in cold blood while attempting a backroom “sermon” of sorts denouncing God as a deadbeat dad.

As always the plot has Character A needing to get to Point B while Character C, Gabriel in the first two films, and “evil” angel named Zophael here tries to stop him, usually by a technique known as death. It worked for the first two but seems a little tired here.

Walken is back as Gabriel once more, along with the morgue attendant as the only familiar faces, though now Gabriel is human and homeless. He can drive but he can’t get a job apparently, he spends the bulk of the week saving for hookers so he can find momentary release. Gabriel pops up from now and then to give unsolicited advice, but in reality he is only here because Walken agreed to show up once more, the same film could be made without him and you wouldn’t notice.

Once Zophael shows to take Danyael’s heart the movie kicks into the same old formula. Danyael “rises” from the dead, stronger and better than ever, with a new sixth sense style warning system that seems to twig when he is in imminent danger. Now that he is reborn he is basically ½ Angel, and apparently is therefore the only guy that can stop something quite dramatic from happening due to the continuing Angelic War.

So off they go to stop Pyriel from basically supplanting God and creating Hell on Earth… Apparently.

Zophael takes Danyael’s girlfriend Maggie as both chauffer and aide, Danyael heads off to a distant spot apparently being lead by some sort of internal holy GPS, and Mary from the first film returns for a (very brief ~ 30 second) cameo.

There is some pompous sounding talk from those currently or once Angelic, some disbelieving from the humans despite what they continually witness and some serious sounding theological discussion that makes these films either more or less watchable, depending on your viewpoint. Put another way, if you like the first and second films you’ll think this a 7.5 / 10.

I’ve seen all 3 (+2 more still to come) and if I separate me from my love of the first film and respect for the 2nd, I can impartially say this is a 6.5 / 10 when viewed in isolation. OK, but merely OK.

Final Rating – 6.5 / 10. It still holds true to the tone that made the first film a minor classic, it just has nothing new to say.