Master and Commander: The Far Side of the World (Review) 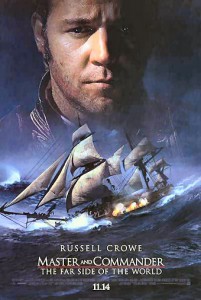 Whether that pushed audiences away or not isn’t important, I personally never bothered with this because I assumed it was merely another “we’re all in the navy let’s have some ship to ship battles” thing. And it is, it’s a good one, but that’s nonetheless what it is.

We join the action in the second quarter of the battle between Napoleon and the Rest of the World, represented in this case by England ship the HMS Surprise. The Surprise is captained by one Jack Aubrey played by Rusty Crowe and has a crew of 200 give or take, some of them only kids. (And I mean kids, as in 12/13ish!)

The year is 1805 and things haven’t been going that well for the ROW team, Napoleon has basically been giving them a little bit of a flogging, and it is Rusty and co’s job to track a French warship that is in the area and engage if possible.

Course it’s possible, this is a naval battle film!

Can I just cut some corners here and say that tactically the French captain and Rusty seem to be on a par, each coming up with whiz bang ways of getting into or out of range, and each pulling some nifty tricks that are totally unexpected? (That saves me from having the explain each one, there are a lot.) The French ship is bigger, better defended and faster however, otherwise it wouldn’t be that much of a movie, what with the big boy bullying the little boys around.

After an early battle that doesn’t go their way the men want to call it quits and head home to their toothless loved ones that eat terrible food, Rusty sez “No”, perhaps remembering he has a bunch of kids and that scurvy is probably more tolerable, and besides sailors get regular sex… with each other. So FORWARD we go.

The constant voice of reason and doubt is Paul Bettany’s as the ship’s doctor, he wants to rest up and take a trip to the local Galapagos Islands where he can indulge his love of animals, in the scientific sense that is, (I’ve already cracked the standard navy =  gay jokes, seems a bit think to add beastiality). Eventually it seems that the odds are against them and some key personell are injured so Rusty calls the whole thing off.

But it’s never that easy.

This might come off (and is) an extremely simplistic and glib review of a vast and ambitious film. In reality there is much to like about M&C etc, the ships look splendid and amazing when in full sail fanging along the open ocean, the storm scenes and sea battles are incredible, I’m not sure if they used CGI or not but in any case… incredible and there is more than enough tough decision for Rusty to make to either escape or succeed, and of course they usually have negative implications too such as the death of crew.

Rusty’s captain is a fierce tactician and soldier, but obviously a loyal shipmate and great leader, and Paul Bettany’s ship’s Doc is at once a confidante and counterpoint to the captain when he fears he is a little ahead of himself.

This is very much an exercise in substance over flash and meaningless FX and as such is a triumph. I myself have seen enough examples of substance though, and maybe I might change as I get older but in my eyes even a film of terrific realism and vision is still only just worth watching as far as I am concerned right now.

Final Rating – 7 / 10. Just what I thought it would be, only better. And yet still the same, (somehow). Worth a look but not a crowd pleaser.