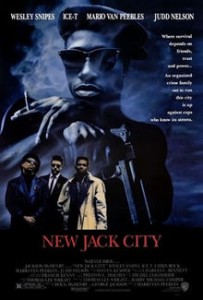 Even in the (great) poster Nino is LAAAARGE!

When New Jack City was released I was fascinated by the characters and mesmerised by its power – I was also 17.

Now almost 20 years on I see some of the flaws and broad strokes used that detract a little from the effectiveness of the film, but it is still a pretty solid genre piece with a standout performance from Wesley Snipes in what turned out to be a career defining role.

A great opening sequence introduces us to Nino Brown on the job. It is 1986 and while Nino is already large he is not yet LAAAAAARRRRRGE! As he will be a little later on… 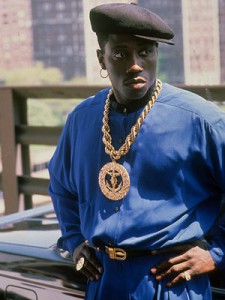 Nino is the personification of hip-hop cool, he wears clothes that might be described as “fly”, rocks several ostentatious gold chains and items of jewelry and almost always wears the obligatory early 90s Kangol hat. He also has a slick tongue and an ear for a quotable line.

Nino’s is practically posse-less at this early stage but his right hand man Gee Money (Allen Payne) is already in place. On this day Gee Money brings something new to the conversation, a new drug named Crack that is apparently already creating a buzz in urban areas.

Nino devises a plan that sees the newly formed gang the CMB (Cash Money Brothers)  take over an entire apartment building called the Carter in a low income area, using force where necessary. Once under their control they convert the whole building into a home base to run a high tech, organised drug selling premises, complete with employee uniforms and membership cards! The Carter rapidly becomes the hub of operations and a well known no-go zone in the local area… unless you’re looking to score.

Fast forward three years to 1989 and crack rules, this time Nino is indeed LAAAAAARRRRRGE, and the CMB are runnin’ thangs in a big way, but he has even greater aspirations.

Nino’s escalation of operations sees himself get noticed by the Mafia who aren’t too ecstatic with their decreasing market share, and the cops, who decide to take action… after only three years! 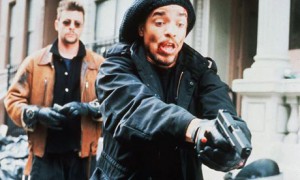 Ice T and Judd Nelson: who woulda thunk it?

A taskforce is built to take down the CMB – not much of a task force but a task force nonetheless. It is comprised of 4 guys and only three merit description aside from “the Asian guy who hardly talks”. These three are leader Detective Stone (Mario Van Peebles), maverick black cop Scotty Appleton (Ice T) and maverick white cop Nick Peretti (Judd Nelson).

These three spend most of each day debating race and drugs, without ever seeming to think “Gee maybe if we take down the apartment building drug complex that might do some good”.

As the cops escalate things by getting a reformed crack addict named Pookie (Chris Rock) to infiltrate the Carter and report back, tensions increase between power hungry Nino and former best bud Gee Money. It doesn’t help things when a gold digging hoochie named Uniqua (I wish I made that up!) gets involved and strings both of them along by their zippers. 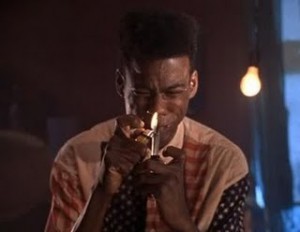 Being high is the only excuse for picking that shirt.

I’ll leave the action there aside from mentioning that when an initial police operation fails things move quickly from there until the end, leading to some pretty ludicrous events.

New Jack City is quotable at times, but just as cringe worthy at others with some of the attempts at catchy lines falling very flat. The dialogue between cops is often most lamentable of all, which seems strange as Mevin Van Peebles plays lead detective Stone, and he directed the thing!

In 1991 I had no idea just how broadly stereotyped the characters were, all Nino seems to do is play basketball and watch Scarface, and the less said about the Italian Mafia the better.

New Jack City hasn’t dated like the flat top haircuts and formation dancing that both appear in the film, but certain scenes pop and Wesley Snipes puts in an over the top performance as the insanely confident and driven Nino Brown that serves as the centrepiece of the film.

Final Rating – 7.5 / 10. For a couple years I thought New Jack City was the best film ever… It isn’t. But while it hasn’t aged well it is still a solid pic with some memorable scenes and a great bad guy.