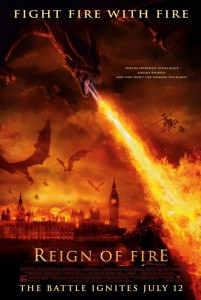 Look closely, there aren’t that many helicopters in the film. (In fact there’s one.)

I’ve watched a couple of good B movies recently, which inspired me to drag one of the better ones in recent years out of my personal collection for another look.

Reign of Fire is the best possible dragon-based film that I think they could have made with a reasonably low budget, and that is meant to be a compliment.

The film opens with a young boy named Quinn going to visit his Mum at work, only Mum works in an underground shaft beneath London. Quinn is all of 9 or 10 and he saunters in unchecked aside from some friendly comments from other workers, so we know he’s been there before. Now it is worth noting that all the workers are rocking hardhats due to the nature of the job, apparently Quinn isn’t that important or at least has a rock hard bonce, as no-one thinks to mention he isn’t wearing one.

In any case the next thing Quinn sees renders a potential bonk on the noggin insignificant in the overall scheme of things. A hole in the rockface is too small for a worker to go through: no problem! Let’s push Quinn through. (Still no hat though…)

What Quinn finds inside is of course a dragons, up until this point it was hibernating, now awoken it decides to rub its eyes and pop outside for a week look around. Not before the standard post-nap smoker’s cough (come on a dragon of all things must have a cough!), which unfortunately chars many workers instantaneously, including Quinn’s poor Mum, even the hat couldn’t save her.

Adult Quinn, now in Christian Bale form, wakes up from his dream. We are now in 2010/2011 based upon newspaper headlines that serve to open the film. Apparently dragons have become rife worldwide, causing much carnage and driving survivors into preservation mode, as the dragons seem impregnable to almost everything mankind can throw at them.

In a nasty turn of events the dragons have destroyed much of the world for their own dietary needs, as they apparently live on ash. This leads them to raze as much as they can to the ground, including crops, homes and indeed entire cities.

Quinn is now leading a group of survivors who have holed up in a castle. Times are bleak indeed, food is scarce and the adults have the unenviable task of teaching young children basic survival techniques as they spend much of their lives indoors, far beneath the walls of the castle fortress.

Sentries are posted on the walls with the express task of keeping dragon-watch. They are aided by hawks, who have excellent eyesight, and not least of all an instinct that dragons are naughty and might eat them, so their vested interest in not being eaten helps alert the humans.

Quinn’s 2IC is MacReady, who I now realise is played by Gerard Butler in what must have been an early role of his. Aside from MacReady and a young lad Quinn rescued when a toddler (and has now taken under his wing), the rest of the survivors are largely faceless, just huddled masses desperately clinging to survival.

That is until one fateful day, when driven by hunger a family ventures from the safety of the walls to check on the crops nearby, you can guess how that goes can’t you?

Now the scene serves to do little more than prove that dragons are very dangerous, and that Quinn and co are very protective of their group, but it is a very effective scene and shows just how realistic CGI can be with even a moderate budget. This is hardly Avatar-level work, but it doesn’t distract you with herky-jerky movements or being obviously faked on the cheap.

So bruised and a little scalded, the group return to the fortress and try to revert back to what passes as “normal”, when the everyday threat of unannounced dragon attacks is a constant possibility.

Then, as they always do, the Americans arrive to fuck things up.

On the horizon appears a bunch of armoured vehicles including a tank and some large troop transports. Sitting in the “shotgun” seat in the tank is a balb/bearded/heavily tatted & muscular Van Zandt, played by Matthew Mconaughey, in the one role that I haven’t hated him in.

Van Zandt and his “Kentucky Irregulars” are a group of US mercenaries that apparently had the nous to trace the source of the dragons back to London and plan to wipe them out with the old “cut off the head and the body will die” trick.  After a tense stand off Quinn reluctantly lets the mercenaries past the castle walls.

(One thing I’ll give credit for: whoever wrote this spent a lot of time justifying the dragon mythology and backstory, when you are dealing with such a preposterous concept it must be easy to give up and go with a half-arses idea, more or less saying “look just go along with this right”. But in Reign of Fire everything meshes together quite well, and the only suspension of disbelief that you must maintain is the fact that dragons even exist. Well that and that Matthew Mconaughey still gets paid to act.)

Once inside Van Zandt explains to a sceptical Quinn that the seemingly invincible dragons are in fact susceptible at various times of the day, namely in periods of half light when they can’t focus, this is when they strike.

Now fortunately shortly after Van Zandt is given the chance to back up his bluster, as on the horizon looms… A DRAGON! Oh wait, I already said this is a dragon movie, that wasn’t surprising at all was it?

So Van Zandt and crew prove that they are for real, though not in the smoothest manner possible, and after the “after-party” they ruffle many feathers by conscripting some of the men from the outpost, to the disgust (and physical detriment) of Quinn.

Of course Van Zandt has plans to kill the daddy dragon and believes this will solve mankind’s dilemma once and for all, after a brief (but serious) setback to his plan, he, Alex and a reluctant Quinn head off to London in the helicopter to face their foe, once and for all.

There is a lot to like about Reign of Fire, although it obviously isn’t big budget a lot of care has been taken with maintaining the tone of the film. The CGI dragons look pretty cool and are never that shonky that you think “wait, dragons aren’t real!”, (even though you should really).

There is lots of staring and brooding by the main characters, which sounds reasonable as they have only spent the better part of the decade watching their friends and family get flambed one by one by a creature that doesn’t even exist.

The action sequences are well paced and effective and for a moment, just a moment, you might even forgive McCona-hey-hey for appearing in so many shitty chick-flicks.

I said might. I had to sit through Failure to Launch one day and I will NEVER forgive him for that.

But this is Reign of Fire, and this is about as good as a B movie gets.

Final Rating – 7.5 / 10. Surprisingly effective for a B Movie and a solid jumping point for Bale and Butler, who both went on to far bigger things.