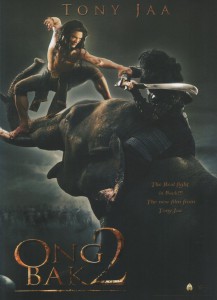 “Who stole my Buddha head 2”

For years I have called the original Ong Bak “Who stole my Buddha head?”, and The Protector was always “Who stole me elephant?”. After all, that was entirely the plot of each film, pushed out to 90 minutes by the breathtaking physical feats and awesome fighting abilities of one Tony Jaa.

So I guess this is welcome to “Who stole my Buddha head 2?”

Nope, this is a prequel my friends, and it has nothing to do with Ong Bak whatsoever!

They could have named it The Protector 2 and it would have made more sense, after all one of the talking points in this film is the mastery the main character has over elephants.

This will forever be a mystery to me. But as I watch these films for the fights, not the plot, who cares?

A long, long time ago, before sweatshops. Before live sex shows. Before even pirate DVDs.

A feisty young boy is taken by well oiled and muscular pirates and thrown into a pit to fight a crocodile. If he survives he can… they never really say, I guess no-one survives.

Of course he survives, and that well tanned and muscular young boy grows up to be musical superstar Pink! No wait, that was another young boy.

This boy is taken in by pirates and taught martial arts, mainly by a senior pirate with horribly dodgy facial hair. The boy’s name is Teean, and after 20 minutes or so of boring stuff he is a pirate.

After a few more minutes of filler, including a bunch of sweaty grunting fights with various guys using different fighting techniques Teean becomes the 2IC of the pirate gang, not bad for a talentless hack whose main claim to fame is some tattoos, a nose ring and the ability to safely tuck away her dick… No wait that’s Pink again. It’s easy to get confused with all the sweating and grunting going on, sorry.

There is a cool drunken Muay Thai scene that effectively shows off Tony’s skillz, an elephant riding scene, that if it wasn’t computer generated was a cool stunt, and some clumsy scenes that serve to show us that Tony/Teean has one last mission before he can accept the main Boss spot of all the pirates.

Or something. Half way through I lost track of the plot and started twiddling thumbs waiting for the next fight to start. There is less action in this than in either “Buddha Head? 1” or “Elephant? 1”, this is simply too long and repetitive.

The last fight is good but also suffers through repetition, and the likelihood is that you simply start waiting for this thing to end.

As with all Tony Jaa movies you only watch them for the fights and stunts, so to summarise.

Final Rating – 6.5 / 10. Tony Jaa might be the best athlete and martial artist in fight scenes today, he just makes shitty films in between those fights.