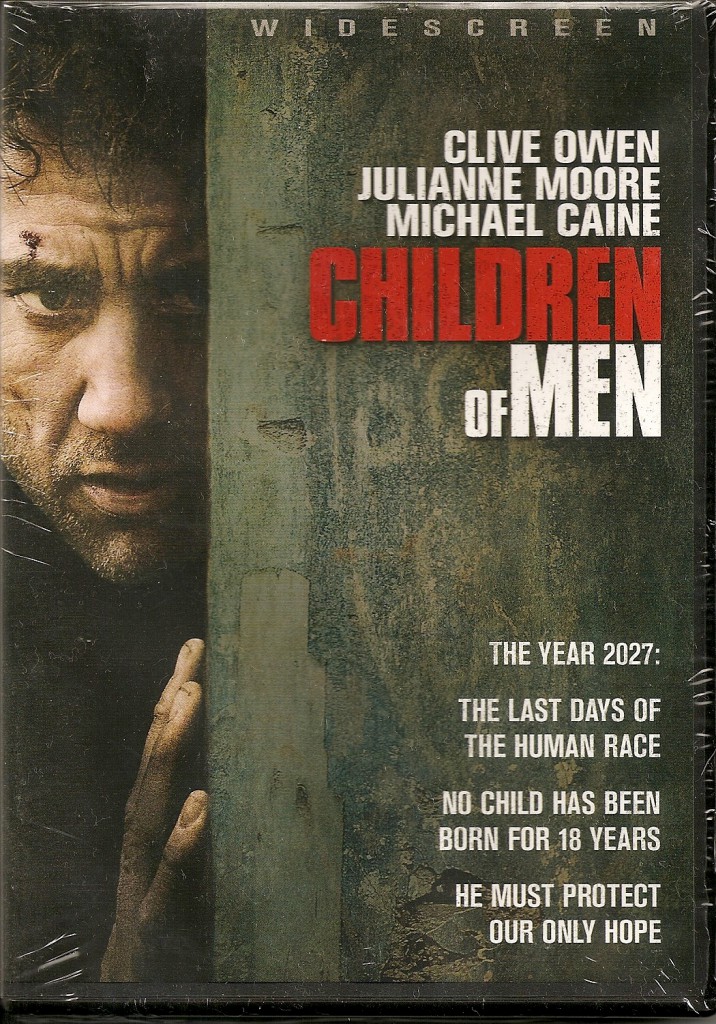 Don’t hide Clive, Jennifer Aniston isn’t in this one.

Sometimes in between watching films about underground monsters, vampires, ninjas and mindless violence I actually enjoy watching quality films that tell a story.

The year is 2027, and since 2009 (gulp) the human population of Earth has been unable to repopulate.

This Global infertility has meant that the youngest person on the planet, and symbol of hope “baby” Diego is now 18, and when news comes of his tragic early demise the sense of despair is obvious.

Even prior to this new development civilization was in bad shape, the film is set in London which appears in a constant state of at least semi-anarchy. In fact the opening scene chillingly and brilliantly shows that terrorism and violence is a constant risk. Chaos reigns for much of the city and indeed most major capitals across the world, as refugees from even poorer and more unfortunate locations are constantly rounded up to be shipped to internment camps.

In short it seems that there are clear divisions in the populations, respectable and non-respectable, and you don’t want to be in the class with the prefix.

Among all this chaos is Theo, played by Clive Owen, a slightly apathetic everyman seemingly doomed to a life of mediocrity. Theo takes the news of Baby Diego’s demise as an excuse to chuck a sickie and visit his hippie-ish friend Jasper, who lives with his catatonic wife in isolation in the middle of nowhere.

Jasper seems to live his life by T-shirt slogans such as “Relax”, “Shit Happens” and “Don’t Worry Be Happy”. When all else fails he simply rolls a big joint and takes a temporary exit from existence.

Upon his return to London Theo is almost immediately abducted in broad (muggy English) daylight on the street, upon setting eyes upon his captor he is amazed to see his ex-wife Julian, who has been on the wanted list for some time due to her dodgy activities and associates.

Julian needs help smuggling a refugee out of the country, she hopes that Theo can provide the required papers to facilitate the move. Not wanting to risk his skin Theo initially says no thanks, however once released he approaches his more privileged and connected cousin for the papers, in a scene that reminded me an awful lot of Blade Runner.

Now armed with the documents Theo once again makes contact and says that he will help on one proviso, that he is allowed to tag along.

Theo meets the girl named Kee (wink-wink) and her nanny/minder Miriam and they set off with Julian in tow, and this is where the movie elevates itself above most other movies of the last decade.

It turns out that Kee is pregnant, remember that hasn’t happened for some 18 odd years, so Theo is understandably shocked. The film doesn’t try to explain how or what it means, only that it is very important.

The very fact that someone was actually able to conceive has been kept top secret, some want to use the information for political means, others more symbolic, and still others want to terminate the “problem”.

Julian represents an underground group who wish to deliver Kee to a mysterious organization known as the “Human Project” so that she might be protected and studied, so that an answer might be sought.

Of course everything goes pear shaped when the car they are travelling in is ambushed and Julian is killed, meaning Theo must decide which side he is on and where to go from here.

The rest of the film follows Theo and Kee, who has decided he is the only one she trusts, as they attempt to reach a rondezvous with the Human Project.

The filmmakers show no favourites, seemingly important characters are killed off, no-one can be trusted, and violence is unfortunately everywhere, something shown in this film in occasionally graphic detail.

There are some absolutely brilliant set pieces shown in apparently unbroken real time with one camera, these scenes seamlessly blend in long sequences, intricate dialogue and action and stunts, and they are truly awesome.

There is not so much a finale as there is an ending, if that makes sense?, as everything seems to continue building as the film progresses. If there was a finale though, it would happen in a refugee camp, where violence is even more prevalent, chaos reigns and the fact that most of the internees are foreigners results in more confusion for Theo and Kee as they continue onwards.

I don’t know much about acting but this all look top notch to me, especially Clive Owen who I have a bit of a man crush on. The film is brilliantly paced and visually striking from beginning to end, and the action is incredibly realistic and therefore has more impact than your standard “bang-bang, you’re dead” stuff.

I haven’t seen many films that were as original as this, nor have I seen a film that remained with me for as long after the credits rolled.

This is a great film.