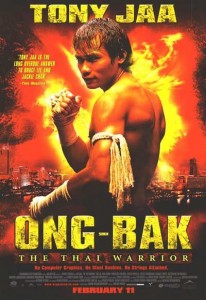 Over the last few years I have mocked the basic plotlines that keep Tony Jaa from becoming the most renowned martial artist appearing in films today. The Protector was ‘Give me back my Elephant’ and this film ‘Give me back my Buddha head’, both scripts boast essentially the same elements; someone takes something that belongs to Tony’s family or village and the normally placid young man reluctantly kicks and punches his way through the naughty guys to retrieve that something.

It’s a shame, because with a half decent plot and the bare minimum of directorial skill I have no doubt that Tony Jaa has the physical attributes to make the world sit up and notice.

You won’t believe this, but some naughty guys take the head of the sacred Buddha statue in the small poor village in which Ting (Tony Jaa) lives. The villagers are distraught, and 5 minutes later they all kick in what they can and Ting is off to the big city to pick up the trail.

The first night only show Ting that he isn’t in Kansas anymore, and provide him with a couple of hangers on in the form of a feisty young girl and an opportunistic – and slightly shifty – dude.

Of course pacifist Ting doesn’t want to fight, but thankfully it seems every second person in Thailand does, so he gets ample opportunity to showcase his breathtaking abilities, athleticism and flair. Even when Ting chooses to run he manages to leap and twist through the back alleys and shanty areas in photogenic style, aided by the fact that every other bystander is holding an obstacle that Ting needs to leap over, around or under.

But we don’t watch these movies to see the hero simply get away, we watch so that when he eventually (and inevitably) loses the plot, he is forced to kick seven shades of shit out of everyone within range of his elastic legs, elbows and knees. At various times, usually when a defenceless woman is in peril, Ting becomes the Thai Tasmanian Devil, a whirlwind built to leap about while inflicting pain, capable of ending any amazing feat of physical awesomeness with a powerful kick or flying elbow – often to the top of the head. As bad guys tend to do Ting’s foes travel in packs, as one falls another steps into the breach for his medicine. And Dr Ting is happy to administer the right doses to one and all. If nothing else this film should teach people that you just don’t take Tony Jaa’s stuff…

Final Rating – 8 / 10. I don’t care if he doesn’t speak English. I don’t care if he can’t act his way into a Year 1 play. I don’t care if the plots of his films are written on the back of a beer coaster. Keep your over-done parkour, your energy drink selling X Games and your moronic Jackass stupidity. When he is in full flight there are few things more awe-inspiring than watching Tony Jaa treat gravity like it’s an imposter.

THIS is why this badly plotted, generically scripted, poorly directed film is an 8.

THIS is why you should watch Ong Bak if you even pretend you like action.