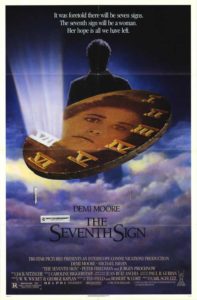 A river bleeds. The fish boil. A desert city freezes over.

Small but undeniably weird things are happening the world over. Seemingly unrelated, but are they?

Half a world away Russell (Michael Beihn) and Abby (Demi Moore) await the birth of their first child, after a history of painful complications and unfortunate experiences.

With the new arrival imminent money is tight. Russ and Abby decide to let out a vacant room. The mysterious David Banner (Jurgen Prochnow) appears one stormy night to apply for the vacancy. In the weeks that follow he hovers in the shadows, broody and enigmatic, always armed with a frankly ominous aside.

As religious types look forlornly at an increasingly broken world, Abby’s once routine pregnancy becomes increasingly difficult. The couple look for possible reasons and solutions, but to no avail. This is nothing that doctors have seen previously.

And elsewhere on the planet something bizarre and portentous takes place, and David Banner casually provides another reference to a disaster that could precede the end of the world.

This is Demi’s film and she shines in the period before she decided it was easier to take off her clothes than to give an actual acting performance. Here though she isn’t asked to do much more than mimic the audience, namely appearing confused and worried for her unborn child.

There was a brief but worthwhile era of cheap films with theological and / or paranormal themes in the 80s. The Seventh Sign doesn’t reach the (modest) heights of The First Power or The Prophecy, but it serves well enough as a reasonable Rosemary’s Baby via The Exorcist facsimile.

Final Rating – 6.5 / 10. As far as films about the potential coming of the Antichrist go, this is another one.