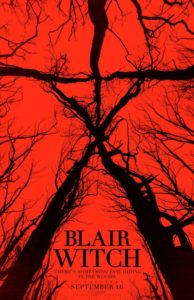 It must have been hard to justify a remake/reboot whatever of Blair Witch, the first 90s viral property that took a single idea and spun straw into box office gold.

It must have been hard to find the right director. Someone who could elevate this beyond a series of toddler craft level omens, confusing forest trails and late night strolls in pitch darkness. But they managed, get ready for more omens, trails and strolls.

It must have been hard to find actors who could bring something new to their performances and not simply replicate the exhaustion, uncertainty and ultimately blind panic of the original trio. But by jingo they did it, with all new trudging, yelling, sniping and screaming.

Well surely it must have been hard to come up with new scares?

It would seem that the only new thing Blair Witch 2016 brings to the table is the tech. They use a drone, GPS and go-pros. Of course one of these help in any meaningful way, as anyone who has seen the Paranormal Activity films would already know.

It must have been hard justifying a remake that brings nothing new to the table. So hard to try to justify a low budget film with no name actors that rides the coattails of the film that was dollar for dollar the most profitable of all time (it made a quarter BILLION dollars!). So hard to bring credibility to a project when knowing that it only needs a small audience of people too young for the original film to pony up their allowance to be scared in new (and entirely the exact same) ways.

In saying that, anyone who saw the first film should know that – however unmeritorious this all seems – it’s pretty easy to generate a few scares from innocent people running terrified into the night. Just remember; continued silence = unnerving, and; constant noise = annoying.

Too often this film forgets the former and settles for the latter, but as far as entry level horror goes, well there’s plenty of that nowadays, and still not much reason for this.

Final Rating – 6 / 10. Once more into the dark woods my friends. Let us stumble and scream once more. Filming all the way.