A Most Violent Year (Review) 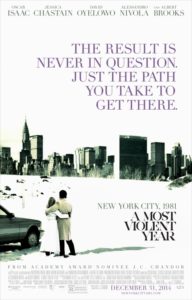 New York City. Circa 1980. A city experiencing its highest crime rate on record (hence the title).

Abel (Oscar Isaac) and Anna Morales (Jessica Chastain) run a heating supply delivery business, one that they are striving to build a niche in an aggressive and thou competitive market.

They are both headstrong and determined to succeed, with three young daughters to raise.

Abel and his lawyer Andrew Walsh (Albert Brooks) have identified a property purchase that they feel will provide them with a competitive advantage, but with the finances already strained and the banks reluctant to extend further credit, they must consider private financing at high interest and higher stakes.

Exacerbating the tension is the sudden onset of truck-jackings of their oil delivery vehicles, which cost them profit, product and trust from their staff.

The police are little help and their competitors see little reason to intervene seeing as they stand to profit from Abel’s loss. Abel refuses to resort to violence of his own for fear of risking his license to continue in business.

Pressure mounts from all sides, but Abel and Anna only grow more determined to make things work.

Oscar Isaac and Jessica Chastain ensure that you ride every bump and endure the rising tension alongside them. You feel the pressure and ponder the implications of each new conundrum that confronts them.

It doesn’t sound riveting, but for the most part it is.

Sometimes to be original one must take some risks. The risk A Most Violent Year takes is to be misunderstood as a ‘boring’ film.

But writing this film off as boring would be missing the point. Perhaps the title will mislead those wanting gore, shootouts and explosions, because this film doesn’t overflow with those things, but this is a character driven drama about a young couple during a pivotal time for their business enterprise.

If that doesn’t tempt you – and to be fair it didn’t tempt me for a couple years since this was released – then you’ll continue missing out on a well crafted and meritorious film. Still, if big explosions etc are your only ‘thing’, that fact alone shouldn’t bother you. Maybe stop reading here and go drop some Mentos into a bottle of Coke.

Final Rating – 7.5 / 10. A most violent year? According to stats. A most interesting year? Mostly. A most competent (if not always compelling) film? Yes.