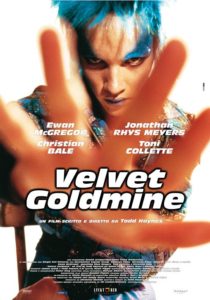 At the dawning of a new decade (the 70s) and a new age in music Brian Slade is the Nu King, a flamboyant eccentric who dons non-gender specific attire and sings ultra sexual songs full of innuendo and accompanied by much writhing and suggestion on stage and in the music videos.

This is his story, as investigated and told by meek reporter Arthur Stewart (Christian Bale).

Like Michael Jackson and Prince in the 80s, Madonna and every female singer in the 90s, and Taylor Swift vs everyone in modern times, Brian Slade has a rival *slash* nemesis *slash* muse in Curt Wild (Ewan McGregor), a fearless trailblazer and glam pioneer known for his outrageous behaviour and unforgettable performances. His live concert histrionics are undoubtedly central to whether you will find this film memorable or not.

Frankly I didn’t. The film wooges along like a two hour dream sequence, with Brian and Curt occasionally coming into each other’s trajectory, and miscellaneous agents, girlfriends, wives and boyfriends providing sporadic friction and tension.

I found Velvet Goldmine to be like many famous people’s accounts. Of the 70s; overlong, hard to recall and full of people trying like crazy to stand out, but ultimately all blurring together into one mildly disappointing amalgam of drab humanity.

For a decade I passed over Velvet Goldmine under the assumption that – while it might indeed be very good – it likely wasn’t my thing. I never fawned over Bowie, Culture Club or any of the vaguely androgynous stars of the 70s and 80s, and biopics of characters I don’t find all that interesting rarely wow me.

Now, having watched the film, I can say not only am I still not besotted with the glam era that this film portrays, but that the film itself isn’t nearly as excellent as it was made out to be.

Final Rating – 6.3 / 10. In Glam, the more outrageous you are, the more famous you become, Velvet Goldmine ultimately succumbs to this misguided way of thinking, but it takes more than some frilly outfits and boys kissing to make a masterpiece.