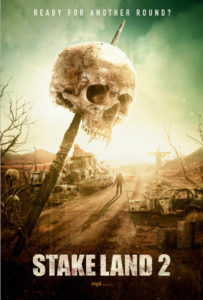 As with The Pact 2, Stake Land 2: Stakelander was an even cheaper version of an unexpectedly good low budget original that squeezed everything it could from a thin premise. The odds of lightning striking twice were slim, and while there are no genuine sparks here, the worst thing about this film is the title. I mean ‘Stakelander!’ Ugh…

Where the first film left with grizzled vet Mister and baby faced boy Martin separated by love, they find themselves driven to reunite years after the first film’s end due to tragedy and bloodshed. Now, it’s hard enough to track down someone in a shopping mall without playing phone tag, let alone with no phones and no means of communication across a desolated country plagued by vampires and people that would just as soon eat you as look at you, but that’s what faces Martin.

To be fair, it takes him a couple days…

Sidebar: why is it that in the event of apocalypse the first thing survivors do is rush to team up, give themselves and name and a dress code?

The bad guys in Stake Land 2: Even Stakier, wear refashioned hessian sacks that must smell awful and present serious problems with ventilation and itchiness. They are dubbed

The Brotherhood are lead by a vampire who looks like Tilda Swinton, though most vampires do look like Tilda Swinton. But as with The Walking Dead, the Vamps here are supporting players to hover menacingly on the periphery until the final showdown. Only then can they shamble in and provide a threat.

What Stake Land Dos does best is maintain a depressing and exhausted tone, with drab backgrounds and washed out colours ,most notably the grim blue-green nights. We are left with little wonder as to why Mister and Martin might be a tad perturbed by their circumstances.

As with The Pact 2, Stake Land 2: Stakes is High, is akin to fast food Coke, it isn’t the genuine article and is obviously cheap and nasty, but it works well enough in a pinch.

Final Rating – 6.7 / 10. Better than a TV movie should be, an unexpectedly worthy sequel to a film that still holds up in a genre saturated by copycats.