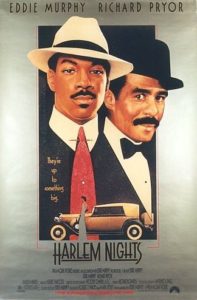 Harlem Nights seems in the surface as something of a vanity project. A perfectly understandable and often admirable one yes, but a vanity project nonetheless. Richard Pryor, Eddie Murphy and a large group of comedians and character actors get the chance to dress up and engage in a gangster period piece. This is not meant to be disparaging or condescending, I would love it if this was a good film. But it just isn’t.

In swinging pre world war 2 New York City Harlem is the place to be, with bumping clubs and any number of illicit distractions. Perhaps the most swingingest is Sugar Ray’s, a club that has become the epicentre of late night entertainment, and the place to find hookers, gambling and all things fun.

The manager is appropriately Sugar Ray (Richard Pryor), a man who achieved his position through sensible moves and remaining loyal to those who help along the way. Ray’s right hand man is Quick (Eddie Murphy) a man younger and brasher. Behind them both are a team of loveable eccentrics, a colourful crew of coloured folk delivering lashings of colourful language.

Of course one of the side effects of success is envy, and Sugar Ray’s rise is accompanied by the unwanted attention of vicious business rivals, crazy clients, crooked cops and foxy ladies, all lusting for money and power.

With pressure coming from all sides, it would seem that Sugar Ray and his crew’s days in Harlem are limited, and perhaps due to end at the same time as the big heavyweight title fight that looms large on the calendar. With a contest as anticipated as this one, gambling money is sure to flood in, and Ray concocts a high stakes plan of his own.

With a lavish setting and an apparent license for larger than life action and characters, Harlem Nights could and should have been more than it ends up. With Eddie Murphy and Richard Pryor on hand, this should have been an irreverent laugh fest from beginning to end. Somehow though, they end up as almost the straight men, watching on as those around them all take turns to steal the spotlight. Alas, aside from these few notable moments from a supporting cast including Arsenio Hall, Redd Foxx and Della Reese, Harlem Nights cannot overcome itself, resulting in a few amusing moments caught in the midst of almost two hours of well dressed tedium.

Final Rating – 6.3 / 10. So many comedians,  so many funny people, all waiting for someone else to bring the laughs…

While I try to throw a joke or two into proceedings when I can all of the opinions presented in my reviews are genuine. I don't expect that all will agree with my thoughts at all times nor would it be any fun if you did, so don't be shy in telling me where you think I went wrong... and hopefully if you think I got it right for once. Don't be shy, half the fun is in the conversation after the movie.
View all posts by OGR →
This entry was posted in Eddie Murphy, Film, Movie Reviews, Superstars, The Grey Area. Bookmark the permalink.