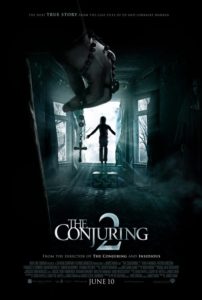 Ed (Patrick Wilson) and Larraine (Vera Farmiga) Warren’s efforts in assisting the Perron family did not go unnoticed. But while the much publicised – and equally publicly doubted – exorcism found the loving couple an unlikely customer base, it also unwittingly conspired to place them smack dab in the ‘firing line’ of all things supernatural.

(Obviously) especially the particularly nasty ones.

Their analysis of the Amityville house post the famed haunting is enough to convince Larraine that from now on, their assistance will be restricted to ‘look but don’t touch’.
Admirable and sensible. In theory.

The Conjuring Dos takes us international, all the way to London England, to the home of single mother Penny Hodgson and her four pre-teen children.

With money tight and practically all their worth tied up in the modest two storey home, the Hodgsons are reluctant to leave, even when almost every kid has terrifying (and extremely noisy) encounters in the middle of the night.

These early scenes where the mystery still remains pack the most punch. They had the hairs on the back of my neck standing to attention as the first film did throughout. But this ghost isn’t very subtle and is far less secretive.

Perhaps in recognition of this, or perhaps just because bustin’ makes them feel good, the Warren’s are jammed onto an aeroplane and sent to give this new allegedly haunted domicile the once over.

When the ‘look’ part of their analysis proves pretty quickly that this isn’t a hoax, the Warrens try ever so hard to resist being embroiled in the paranormal cleansing of yet another haunted house… ever so hard.

Even if The Conjuring 2 fails to scale the same heights as the first film, it is far from the usual first sequel let down. If anything it at least fails in trying something a little new, even though quite often it uses the same tricks to build the suspense.

Horror films should have you on edge for as long as possible. It is therefore pretty remarkable that The Conjuring 2 maintained my interest even when the electricity and tension ended; and perhaps testament to the level of actual care put into what could easily have settled into yet another formulaic sequel. After the first thirty minutes of (a little too long) 130 odd, the film slows and fails to recapture the unexpected efficiency of the original.

The cast are again better than the genre usually sees, with the kids – especially the two young girls – managing not to distract and remind us how silly this stuff must have been while it was being created.

As alluded to before there is every chance that the Warren’s might retrospectively be imposed into every famous historical haunting – not that I can remember any more than Amityville anyway.

If that happens they risk being diluted and having the impact watered down, but when the material generated this far is so strong and laudable in a genre that is often derided as being lazy and cheap, they would have a way to fall before they reach other modern tripe like The Gallows and practically every reboot ever. Take The Poltergeist one for example…

Final Rating – 7 / 10. The sign of a real franchise is when it doesn’t quite nail it but remains worthwhile anyway… Dunno if The Conjuring has legs, but I can’t help but admire the effort.