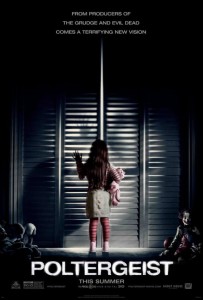 Poltergeist is an incredibly pointless remake of one of the only 80s horror movies that hasn’t dated badly.

For those who don’t know the story, a young family down on their luck move into one of those cookie cutter bland communities and settle in to a home that looks just like all of the other pale and uniform homes in their unremarkable street.

Only this home is not very much like those the neighbours live in, despite appearing the same.

The very first night gives more than enough justification to becoming voluntarily homeless. Stuff moves of its own accord. Doors open and close suddenly and violently.

Toys operate without an operator, and a young girl has a deep conversation with a TV.
Perhaps most tellingly, a wall crumbles to dramatically reveal… A box of clowns.

Poltergeist 2015 is laden with clichés and saddled with the burden of blandness. It’s ironic that in a film about chancing into the one dud among a large number of similar looking things, the end result is just another one of similar looking disappointments – this time inevitably unnecessary horror remakes.

In another world we could feel bad for Sam Rockwell and the rest of the cast, but eventually we must realise for every Ethan Hawke and Patrick Wilson, there must be an equal number of B actors who land in films that don’t pay off in any way.

Poltergeist was scary three decades ago because it was original, inventive and new. This remake is none of those things. The only ancient curse here is the depressing willingness to settle for something this mediocre.

Final Rating – 5.5 / 10. This movie is a box of clowns. A scary concept. A bland and disappointingly dull reality.