Lady in the Water (Review) 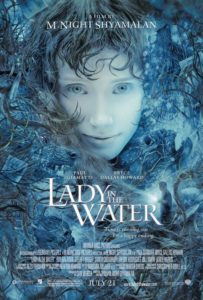 So get this; there are beings that live in the water. Friendly beings. Beings who were once good friends with humans. Then, probably distracted by the release of a new iPhone, humanity fell out of touch with these beings. Sad emogies for all.

So when the building superintendent Cleveland Heap (Paul Giamatti), a man with sadness behind his eyes caused by personal tragedy and the fact that his parents sought to name him ‘Cleveland Heap’, finds a pale, naked, wide eyed red haired woman (Bryce Dallas Howard) in the complex pool, he assumes that he has found another escapee from Jared Leto’s basement. That or she is a fairy tale character who requires an unbelievably complicated array of tasks and unlikely characters to work in unison in order to save her from certain death.

Now you tell me which is more plausible?

This swiftly grows more and more incomprehensible. Aside come the building chock full of insane nutbags, we have scrunts and guardians and prophets and saviours. Also a little old Asian lady who – as luck and the script would have it – knows the entire fable backstory, causing Cleveland to treat her like his own personal ‘Ctrl F’ cheat code.

The story tries hard to be magical, even attempts a knowing wink or two at the audience, but suffice to say Pan’s Labyrinth this ain’t.

Even by starting the story at the end point and working back, The Lady in the Water forces itself into corners in cannot come back from with any credibility or plausibility. It is contrived and convoluted, and above all patently ridiculous and worthy of mockery.
Apparently M Night Shyamalan wrote this as a fable. A bedtime story to tell his kids. Poor kids. They must be staring up at the ceiling all get wondering what the hell Dad was crapping on about.

Final Rating – 4.5 / 10. M Night Shyamalan might have gone on to make more movies in Hollywood, but this represents the point that they took the keys off him.