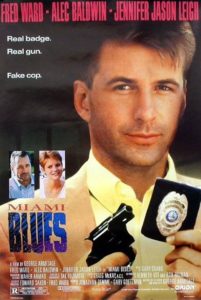 Thanks Miami Blues. Prior to this film I foolishly allowed myself to become bored by ridiculous plots and dull action. Somewhere during the drab 97 minute running time I started wondering if this was all so stale because it was based on a true story and restricted the story.

Ninety seconds of sleepy eyed research couldn’t tell me if this was based upon a true story, but for the time I remained unsure I found myself being more forgiving if the tedium.

So that’s now a thing; if nothing is happening you can generate more understanding by telling yourself that ‘it must be a true story’.

Still, some true stories – even probable fictions like this one – needn’t be told.

Alec Baldwin plays a guy who for most of the film uses a pseudonym but those closest call him just ‘Junior’. As a small time crim and full time dick, Junior opens the film punching a Hare Krishna at an airport. It is when said Hare Krishna dies unexpectedly that he attracts the attention of the law, namely homicide detective Mosely (Fred Ward).

Junior speed-courts a hooker named Susie (Jennifer Jason Leigh) and mistreats his way into her heart somehow, before dabbling in a little identity theft and becoming a douche-vigilante, the least likeable Robin Hood in cinematic history.

It’s a jumbled and unfunny mess with a couple moments that hint at black comedy without success, and other moments that hint at end goals of quirkiness, only without a single likeable or even bearable character. It was several years before Alec Baldwin proved to all what a genuine douche he is, but you don’t have to look had to see the signs here.

Final Rating – 5 / 10.  I truly cannot even guess at what they were trying to do here. Whatever their aim was, they missed…