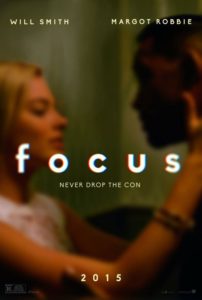 When lifelong multi-threat conman Nicky ‘Mellow’ Spurgeon tells aspiring Jess (Margot Robbie) that the secret of ‘focus’ requires having the ‘mark’ concentrate on one thing while you lift something from somewhere else, he might as well be looking directly at the audience and winking derisively.

You see, for a film glamorising the light fingered and underhanded, Focus has three key scenes in which our photogenic anti-heroes ply their trade, and the first of these seems efficient and plausible enough for us to suspend our disbelief at the ridiculous stuff that follows.

For while we can admire the flawless bone structure and immaculate attire of the two leads, I personally could only be distracted for so long, before my tired and tiny brain got to thinking, causing all sorts of plot holes and inconsistencies to fly out.

First, in a scene – the most effective scene by the way – where Nicky’s crew trawl up and down a busy New Orleans street lifting wallets and purses with nary a flutter from the gormless victims, they almost always distract with some physical contact somewhere, while another set of light fingers lifts the valuable before flicking it to yet a third person, thereby instantly providing separation from potential accusation (“hey I don’t got your wallet!”). The innocent prey have no hope.

But what of the hundreds of other passers by? People who couldn’t fail to see wallets and purses hurtling through the air? Not one of them says anything? Puhleeze.

This sequence is meant to establish the bona fides of the crew. The fact is that the other two primary cons are grander in scale and have less to do with quick hands and far more to do with entirely implausible coincidences and random luck. Let’s just say that NFL security is apparently far more sloppy than I could possibly have ever imagined, and Formula One racing teams are stocked full of idiots.

But perhaps the biggest sleight of hand pulled by the film was having us believe that Will Smith is still a box office draw, when in his own film he is overshadowed by Lil Ms Everywhere Margot Robbie, an Australian who has taken her ‘Joy from My Name is Earl’s cousin from one town over’ thing all the way to the top in no time at all. Yet even her role is ridiculous, I mean why would a woman with Robbie’s ‘attributes’ spend countless hours and imperil herself daily for money when she could bat her lashes and marry half of the NBA, or a team owner for that matter.

Yes Focus is the movie version of a Nigerian scam email. All too predictable, and yet like an all too trusting pensioner I fell for it yet again. Thankfully it was only $4.

Final Rating – 6 / 10. I just hope Will Smith doesn’t use my $4 to bribe Hollywood to keep his kids famous…