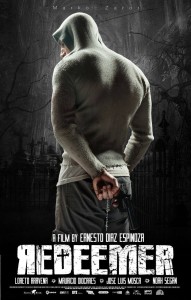 “Get on your knees and beg for forgiveness.”

If you hear this, you are likely a bad guy being offered redemption. If you decline said offer, the alternative involves bludgeoning, stabbing and lost teeth. Better to ask for forgiveness, because when you take on the guy on the poster you rarely win.

Every night is Russian roulette vs dangerous thugs and criminals. The Redeemer has no allegiance beyond right and wrong. His sense of vengeance may be confusing, but he seems to figure that if he takes out enough random bad guys, all that will be left is the guy he really wants to nail.

That would be some flippant American white guy drug lord who sensibly hides behind the countless minions as the Redeemer slugs his way to the top.

The Redeemer has the moves but this film does not ask him to show charisma. This makes him akin to Tony Jaa, an incredible athlete and fighter looking for a film tantamount to their attributes. Unlike Tony Jaa, Jaror finds himself in a film rife with cliche and familiar tropes, which already puts him ahead of Jaa’s plotless nonsense.

Somewhere there is a young teenager watching Redeemer in wide eyed awe, just as I did with Jackie Chan in the 80s. I may be bias but while Redeemer highlights the obvious physical abilities of newcomer Marco Jaror – a man with elastic limbs, fast twitch reflexes and a love of wearing dopey hoodies – it will not have me rushing to replace my Wheels on Meals dvd.