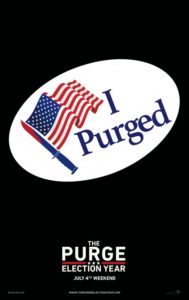 It’s frankly terrifying to me how plausible the heinous scenario proposed by The Purge trilogy of awfulness becomes with each passing mass shooting. When The Running Man was made in the 80s it was dystopian science fiction, now this looks all too real.

And remaining on my invisible soapbox of social superiority for one further second; in my opinion it will be the morons who keep lining up for tickets to this trash that bring about the continued descent into violence fuelled chaos. I can’t help but feel there are disenfranchised young men leaving cinemas showing this film who head home to clean the guns and add to their own personal ‘kill lists’.

Perhaps instead of building a wall against Muslims and Mexicans, the rest of the world should build a wall to keep Americans ‘in’ their so called United States. They’ve been killing themselves for years and it’s only getting worse. I can’t see how films like this will change that.Then I remind myself that to most this is JUST A FILM.

Then I sob inner tears

364 days is a long time for people with low IQs to plot. Some seem to spend the time making elaborate outfits with matching garishly adorned motor vehicles. Others seem to take unnecessary time building faux grudges, perhaps only to have people to unleash so much pointless vengeance upon.

Remarkably enough though in these ugly fictional times, the anti-Purge movement is gaining traction. I mean won’t someone think of the psychopaths? With these pesky anti-Purgers threatening the integrity of the annual cull of humanity, pro-Purgers decide to use Purge night to purge more… selectively.

Leading the anti-Purgers is senator Charlie (Elizabeth Mitchell), a ‘bleeding heart liberal’ who is driving momentum against the annual internal genocide. As luck would have it Leo (Frank Grillo) is her personal bodyguard; talk about earning a year’s pay in a night.
Astonishingly on this one night when murder reigns supreme, key individuals prove unable to remain awake for a mere twelve hours. Never has ‘you snooze, you lose’ meant more.

Of course Leo and Charlie end up running the mean streets pursued by all manner of heavily armed scum, aided and abetted by only Joe the well meaning shop owner, a man who already has his own masked lunatics to worry about.

This isn’t one of those blurry pictures that somehow becomes more clear when you allow your eyes to unfocused. Don’t look for depth in these shallows. Despite the election gimmick this is the same crappy film that has proven sufficient to warrant a trilogy already – with no doubt more to come – but frankly this is drivel profiting from those of us thirsting for competent MA movies. The Purge: Election Year is MA alright, but that stands for Merely Average.

Final Rating – 5 / 10. Vote with your remote this election year, by selecting a film that truly deserves your selection. This isn’t that film.