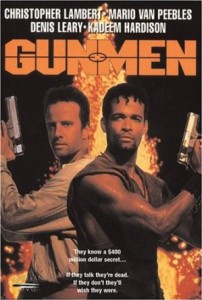 Back in the days where Christopher Lambert was a thing and Mario Van Peebles was more than a computer game character’s name.

A couple is gunned down in cold blood. Simultaneously a young girl is made orphan and a man named Danny (Lambert) loses his brother.

The girl is sad. The brother seethes with thoughts of vengeance.

I can see that film. But it never eventuates. After a couple minutes mourning Danny learns that a boat somewhere is full of money: four hundred million monies. He stashes the kid – never to be thought of or heard from again – and heads off to find his fortune.

O’Malley (Denis Leary) and his assorted scumbags also want the money. But that seems to pop in and out.

The only thing as cheap as the lives of the many minions, are the jokes that make you wonder what would drive Christopher Lambert to think that he was ever funny.