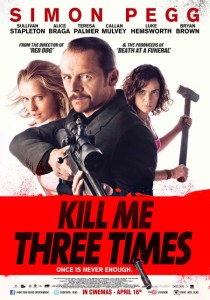 There is much activity taking place in a small Australian town. Nathan the dentist is conspiring with Liz the receptionist to pull off a plan involving insurance fraud and Alice the patient. Sorry Alice. The receptionist’s husband Jack is in a dim room checking the safe and cleaning the guns. And Charlie (Simon Pegg) the English hitman is hovering and watching. Always watching.

Everyone has one hand out asking for money and another reaching for the gun. But that isn’t enough to give this film life.

That’s not to say the film doesn’t try, but it tries too hard in vain doing too much in areas that don’t add any value.

Some Pulp Fiction back and forth editing. Some generic stock surf guitar. A whole lot of noir back stabbery and small town treachery. Not a lot of creativity and common sense.

Simon Pegg is the hired gun both in terms of the film and the cast. He is everywhere and always doing little beyond laughing at the inanity with his eyes. It’s great that the Australian film industry convinced a known name to headline a film, but this is little more than a holiday for Mr Pegg, and a tedious waste of ninety minutes for the viewer.