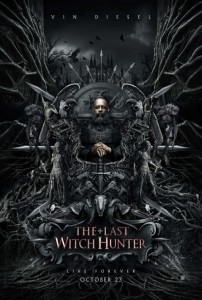 You’d think that the world of the supernatural and mythical creatures has been done. Overdone in fact. Vampires. Zombies. Monsters. Ghosts. Name any and there are a dozen mediocre films from the last few years to underwhelm you.

You’d think that if you really had to throw your money at something, that the world of witches is probably the let interesting. At least on paper.

You’d think that if you ignored both Thought 1 and Thought 2 on the strength of Vin Diesel and the world’s most preeminent wig maker being available, that you’d want to bring more than a watered down Blade, Underworld and Constantine combo.

But then again; thinking has never been Diesel’s strong suit.

As Kaulder the immortal witch hunter, Diesel proves that not even an MMA beard and a flaming sword can make dungeons and dragons cool for the mainstream. Sure his however many millions of Facebook ‘friends’ and social media buddies will consume this product regardless, but a guy in Diesel’s position should demand more.

We are told that witches have been around for thousands of years, the secret to their longevity being ‘don’t mess with humans’.

Kaulder has existed across centuries. He exists to punish the forgetful witches who transgress, which is apparently a large number.

Because Vin Diesel has difficulty with large numbers he is appointed a personal attaché slash statistician. Because he is ageless and immortal, these mortal statisticians don’t last as long as they should. He is up to #36.

Because Vin Diesel isn’t good with names – even though he gets decades to learn them – these assistants are all called Dolan. With Dolan #36 (Michael Caine) passing at the brooms of witchery, #37 is appointed (Elijah Wood). Kaulder is powerful, indefatigable and self healing, but…

Because Vin Diesel isn’t too sharp, he is poisoned and infected numerous times. He is also duped into trusting those he shouldn’t.

In between he be laying medieval bitches down on these very evil witches. And to the social media army, this is the only thing that counts.

Because to toddlers – and adults with a commensurate iq – ‘because’ needs no further justification. The words behind the ‘because’ don’t matter. ‘Because’ is enough, just because.

Because Vin Diesel agreed to be Kaulder the witch hunter. Because he has (save me Jeebus) 100 MILLION Facebook amigos. Because they all spend money regardless of critical opinion, true entertainment value of common sense.

Final Rating – 6 / 10. All that said and remarkably enough it isn’t the worst film ever.