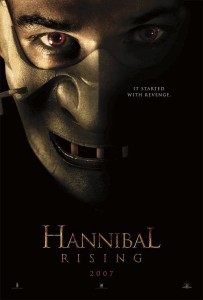 Patton Oswalt once had a bit where he hilariously dismantled the existence of the Star Wars prequels by stating that sometimes it just doesn’t matter where the stuff and characters we like come from. It just matters that they did.

Hannibal Rising doesn’t do much a job convincing me that he is incorrect in this assertion. In fact I kinda forgot I watched this a few weeks ago, and now the only note that jumps out at me is the one at the bottom; ‘perfunctory’.

The core part of Hannibal’s wretched childhood revolves around Mischa, his younger sister taken all too soon in horrendous circumstances as World War Two drew to a close.

The film surmises that young Hannibal carried the abominable memories through  childhood and adolescence – also not happy times by the way – before commencing his European revenge tour and hunting down those responsible one by one.

Gong Li appears as Hannibal’s wealthy and erudite auntie, providing shelter, love, training and inspiration for a young man in need of direction.

Similarly the film could have used such help. Instead of well conceived action and dramatic sequences we get all of the character development that The Silence of the Lambs and even Hannibal proved we didn’t need. It’s fairly obvious that Hannibal Lecter didn’t have the ideal childhood, but if the events in this film are to be believed, there should be millions of such psychopaths worldwide.

The Silence of the Lambs was such a success because it had a well drawn and striking character but placed him in a position to influence and impact the plot. Hannibal tried to repeat the dose, but it seemed that Hannibal works best when striving against restraints; having him wander across Europe was frankly a bit drab.

Here he doesn’t even really have pursuers to create tension, aside from an impotent inspector who seems to know everything but be able to prove nothing.

The character of Hannibal Lecter is proof that pressure makes diamonds, this comparatively free and breezy lad is a drab lump of coal.

Final Rating – 6 / 10. It seems now that when your story has run its course, you cash in one last time with a prequel… Hannibal Lecter has never seemed so toothless.