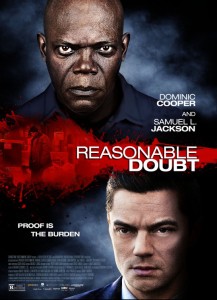 Mitch (Dominic Cooper) is a young and cocky hotshot lawyer. He does not lose a case.
When he makes a stupid late night decision that leads to a dead pedestrian, Mitch flees, fearing absolute loss; his job, nice house, beautiful wife and young  on the line.

But another is identified as being the culprit. Caught red handed with a body in his trunk. Clinton (Samuel L Jackson) is charged with murder.

Only Mitch knows that he was the driver of the car that hit the deceased. When he is tabbed as the prosecutor and asked to build a case against Clinton, Mitch must make a choice; nail the guy he believes innocent, or go another direction?

The film goes another direction entirely, and on this occasion that isn’t so much a good thing. Instead it is 27 different directions, all of them entertainment free dead ends. This film reminded me a lot of Law Abiding Citizen and Lakeview Terrace, two films that made choices I loathed and just continued rubbing salt into the wound.

There are two ways to take this as a viewer. You can embrace it; witness the unlikely! Immerse yourself in the impossible! Experience all the ‘it couldn’t happen’ you can handle. That, or just acknowledge that this is another totally shit film that I will never watch again as long as I live…

Lock me in for option B thanks.

Final Rating – 5 / 10. Does this film suck? There can be no Reasonable Doubt.