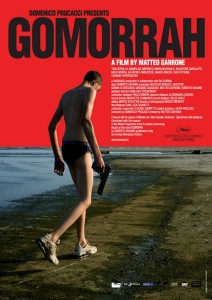 Within 137 seconds IMDb will tell you that Gomorrah is a film about the modern day Italian mafia known as the Comorra, and of five separate pacts between individuals and mildly organised crime

It takes a full 137 minutes to realise that telling five largely unrelated tales, three of them frankly dull and uninteresting and the knowledge that at least – at LEAST – one being removed would improve the film by excision hanging around like a two hour bad smell.

We have the aspiring kids seduced by the life. Wannabe Scarfaces. The middle rungers yearning for ascension. The unassuming slobs who holds lives in their hands. The older people who pull the strings from behind cafe tables, and businessmen desperate enough to go outside the usual sources to be a success.

All of this, but the outline alone leaves out the fact that intrigue isn’t a given, entertainment is not automatic and fascination must be earned.

The Nu-mafia might not be as well dressed as they were with Francis Ford Coppola behind the lens, and they certainly don’t seem as wise or even organised. Like the crumbling buildings and restaurants that they meet in, what was once at least cinematically great is now run down and lacking in colour and life. This mafia is not nearly as demanding of improvement or high standards, as are the critics that label Gomorrah a modern masterpiece.

I require more for my plaudits. The search for realism brings only ennui. This might be real but it is neither riveting nor revelatory. Crime happens. There are levels. Not glamorising the life is laudable, but if you want respect try to make it interesting.