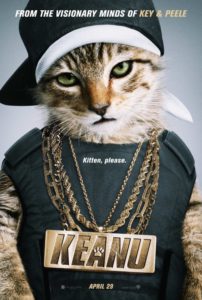 Key and Peele are famous for their insightful and incisive lampooning of modern race relations in their skit based comedy series that only recently ended. I haven’t seen the show, didn’t feel the need seeing as I can recite most of Dave Chappelle’s classics almost verbatim. But I have seen them interviewed on more than a few occasions, and it is obvious that they are quite funny.

So a mistaken identity movie that starts with a stolen car seems a little… off.
Clarence (one of them) and Rell (the other one) are boring suburbanites, tending to monotony by ferrying kids about, running errands and only swearing when the wives are out of the room. Not only are Clarence and Rell aware of their lack of street cred, they lament it, as if ‘hardness’ is somehow close to ‘worthiness’.

It is when the actual street gang called the 17th Street Blips take Keanu, the tiny kitten that Rell credits with getting his life back in order, that *ebonicsplease* da boyz got git hard.
Sigh. So any chance of a modern day comedy classic just got dropped into the litter box.
Now the self-dubbed Tectonic and Shark Tank must bluff and bluster their way through a dangerous world in which they clearly don’t belong. They come up with impromptu stories and fake street slang to pull the wool over the eyes of gang leader Cheddar (Method Man) and his crew, who of course assume they are the dangerous pair of hired killers that they recently called for – but obviously have never seen.

It was when Rell accidentally killed a known Hollywood actress in a botched deal while Clarence convinced some hardened thugs of the merits of George Michael that I felt my life force ooze away. This is hardly a terrible film, just a terribly lazy one, and frankly if they weren’t ‘Key and Peele’ there’s zero chance that this would have made a ripple in the box office ocean.

Final Rating – 6 / 10. Ironically it is their comedic street cred that lead to duo Key and Peele making a humourless and inspiration free film about a duo seeking street cred in desperation.