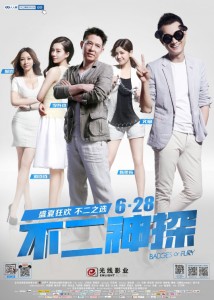 I don’t know where to start or where to begin. Let’s cut to the chase;

When ‘spectacular cleavage’ isn’t nearly enough to garner a film worthwhile status, then everything else must be horribly wrong. That’s certainly the case here with Jet Li’s hands-down worst film I can ever recall.

He is Huang, a grizzled seen it all cop teamed with young and headstrong Wang, under the guidance of a determined female cop Liu as they search for an answer to how three young successful men could be killed in plain sight with big smiles on their faces.

But that’s not important. Nothing here is. I just had to put fifty or so words in before I start bagging this inept effort out.

That plot might be silly and requiring wilful stupidity from the audience, but it could have worked in better hands. Here every lame joke is punctuated by an equally bland sound effect. I kept waiting for “BOING!” to splash upon the screen in garish red writing. Every stupid occurrence is met with a bug-eyed ‘isn’t this crazy’ look from an actor who was probably crying on the inside.

As for the cleavage? It is spectacular and hovering just below a prime suspect’s shapely neck. You won’t have to search for it, the director salivating chest-cam will ensure the goods are front and centre with embarrassing frequency. Like a one trick pony who shamelessly keeps going back to his one trick instead of giving up.

This is a wannabe Kung-Fu Hustle that is so far off the mark that it not only misses the dartboard but somehow also the floor. It would seem impossible that someone could find a cast, secure a budget and spend any amount of money and come up with something this inept. But here you go.

I’m sorry Jackie Chan and The Spy Next Door, but we have a new clubhouse leader in the category of ‘Once essential martial arts legends consigned to accepting horrendous films’. This will take some beating from here.