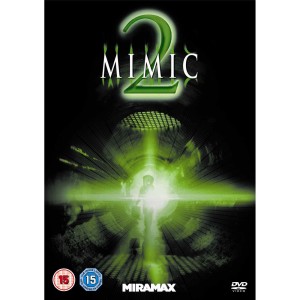 Mimic was a Guillermo Del Toro helmed giant mutated bugs as serial killers film. Despite his obvious flair it was pretty unremarkable. Somehow a sequel was greenlit.

But she’s here, as a part time teacher and part time bug expert. When not part timing somewhere Miss Remy is a serial dater, an idiot attractant with no luck at anything resembling a decent guy.

Then her dates start showing up dead. Not only dead, but in one case literally faceless.  Remy becomes a suspect. But not even this film is daft enough to try to drag that out.

The bugs here are far more direct and aggressive, rendering all of the ‘standing in the shadows’ stealth pointless with continued full on assaults.

Eventually the teacher, a cop and a couple kids get trapped in a school aka ‘the nest’, and she gets to explain again and again the finer points of facing down giant bugs using gross bug facts, never pausing long enough for someone to ponder ‘would hitting them in the head with a large blunt object work?’ Because that would be crazy.

Almost as crazy as making a pale replica of an unlikely film using less than half of the budget, ten percent of the cast and then settling for frankly D grade special effects, the kind of which would embarrass any current day to show.

Final Rating – 5 / 10. Hollywood will go to silly lengths to build a franchise if it can, this is one that should scurry back under the fridge as quickly as it can.