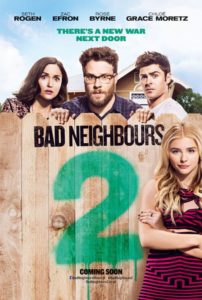 Mac (Seth Rogen) and Kelly (Rose Byrne) are expecting bub #2, with a move to a larger house looming; so long as the next 30 day escrow period proves uneventful… So imagine their tired surprise at the news that Zac Efron and a bunch of precocious teenage college girls are moving back in to the next house with the intent of kick-starting a kick-ass party pad.

Yes it is that unbelievably lazy. One scene requires a barrage of used tampons. Used.

In an alternate universe the could have been adequate. There are actually a bunch of funny people lurking on the periphery of scenes. However they never get the chance to exhibit their comedic wares. Instead the plot keeps circling back to running ‘jokes’ about Efron being ‘old’ and Mac and Kelly desperately trying to remain ‘hip and vital’.

They made Rose Byrne quote Chumbawumba lyrics in the name of comedy.

They made spending time with Seth Rogen seem like the most unpleasant thing you could do.

They made Hit-Girl interminably uninteresting and often unlikable.

They made Zac Efron take his shirt off a bunch of times… Ok that’s kind of his only thing, but still.

The original Bad Neighbours was a tedious attempt at a modern day Animal House. The unwanted sequel does nothing more than add a skirt to the original plot and strip out everything that made that even try to be interesting. But in attempting to empower women, this film does little more than set back humanity.