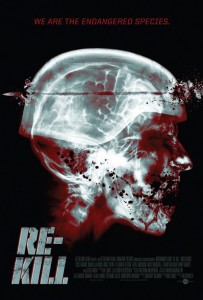 Join Jimmy Mitchell in a reality show with a difference. Go behind the scenes of Division 8, the heavily armed team tasked with ‘re-killing’ the undead hordes.

See never before seen action, including when the bullets fly and the zombies assault, all from the comfort of your lounge.

Hear behind the scenes interviews with the team; the religious nut, the surly loner, the ‘it’s just a job’ guy. Learn their fears, their stories, their motivations.

Hang around for the Robocop style adds for zombie blockers, repopulation and smoking.

Because in the future, zombies are a thing that happened, and as a result of The Walking Dead, we have to put up with a million copycat films like this one.

Watch if you liked: Every other zombie movie. Starship Troopers. Left 4 Dead. The colour beige. Anything flavourless.

Final Rating – 6 / 10. Zombies might be enjoying their Twilight type moment in the spotlight, but all this repetition and ADD style camera work leaves me numb.