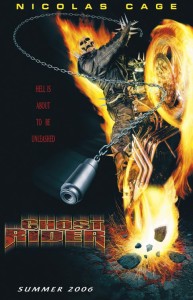 All good things must end.

When young Johnny Blaze sells his soul for his dad’s health, he learns the subtleties of agreeing to a contract. This one awful deal kills his love life and abbreviates his Christmas card list to zero. On the plus side it makes his nigh on indestructible.

This last trait separates Blaze from other stunt riders, who only think themselves indestructible. Now an adult, his every Evel Knievel style mega-stunt is eagerly anticipated and sold out within minutes. Amazing success or incredible failure, Blaze guarantees a show.

Blaze is a household name, but leads an empty life. His staff are well meaning but mostly kept at arm’s length. The fans love is real but cannot be returned at individual level, and Johnny has found no love since childhood sweetheart Roxanne.

Now, just as all seems to be coming together at last, comes the return of the devil to collect his wager, and Johnny Blaze looks on in Nic-Cagian-awe as he learns he will now be the Devil’s soul collector. Always read the small print Johnny…

By day Blaze remains a thoughtful and pensive global icon. (Also an Elvis impersonator with a lousy wig.) By night he ‘flames on’ and summons his hell-bike to pursue and punish the truly evil.

As if that isn’t enough – and it so obviously isn’t – comes the arrival of the Four Shittiest Bad Guys of the Apocalypse, all taking an elemental power; air, water, dust and ice, and taking it nowhere. The water guy especially seems to stand about looking drippy and as bored as we are. But that could hardly be possible.

Each time J Blaze turns G Rider is accompanied by screaming, steaming and probably a few million bucks in special effects, the most annoying part of all this is that we miss the Nicola’s Cage histrionics, which could only be capped off by him screaming “NOT THE BEES!” each time.

Roxanne (Eva Mendes) reappears as a now grown successful tv reporter. She and the drippy, breezy, freeze and dusty bad guys pop up everywhere for the remainder of the film.

It’s all so predictable and lazy. Every bad guy is dispatched in the same way. Every development can be forecast well before it spews out. Sam Elliott reappears as an actual character later in the film, but he’s the only one here who realises how bland and pointless this all is.

For Cage this was the tipping point, his much lobbied for shot at crafting a masterpiece built around one of his fictional heroes. While this is hardly a Green Lantern level disaster it was undoubtedly a disappointment.

Final Rating – 5.5 / 10. And later on Ghost Rider 2 put a full stop to a franchise that – unlike Johnny Blaze – never got off the ground (though it still managed to crash spectacularly).

While I try to throw a joke or two into proceedings when I can all of the opinions presented in my reviews are genuine. I don't expect that all will agree with my thoughts at all times nor would it be any fun if you did, so don't be shy in telling me where you think I went wrong... and hopefully if you think I got it right for once. Don't be shy, half the fun is in the conversation after the movie.
View all posts by OGR →
This entry was posted in Crappy Movies, Film, Movie Reviews, Nic / Nicolas Cage, Superstars. Bookmark the permalink.