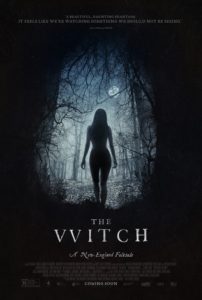 Looks more like an album cover than a witch.

Like the music of Beyoncé and Taylor Swift I can see efficiency and competence oozing from The Witch, but I cannot for a moment join in the fawning and adulation.

That doesn’t mean for a second that I wasn’t on the edge of my couch in a few key scenes, especially early in the film, as an ostracised young family of seven living in the woods must face the prospect that they are being menaced by other beings that exist nearby (you’ll never guess what they are!), but again the reality doesn’t always match the expectation.

Still, the New England setting adds potential for rustic horror – no need for a lack of phone reception and faulty flashlights here – the harshness of reality does enough. Modern comforts aren’t available. Food is not guaranteed. Animals are treasures and weather can be a genuine threat. Add to this the possibility of witchery, the kind that avoid unnecessary cackling and broomstick cruising, and you potentially have yourself a scary antagonist.

Credit must be given to the filmmakers also. There are no cheap scares, and the music helps, with staccato funereal screeching and scratching keeping you on edge.

This all helps, but ultimately The Witch isn’t very scary.

That doesn’t mean you will not be scared. The human imagination is a wonderful fear generator. However when the rising tension isn’t allowed to culminate into an eruption of sorts, atmosphere and tension can only take you so far…

The Witch is a well executed and finely crafted horror film, but if this ends up as the Best Horror Film of 2016, then we have had a shit year in horror.

Final Rating – 7.5 / 10. Too sterile and calculated to be terrifying. Needs more of an edge.