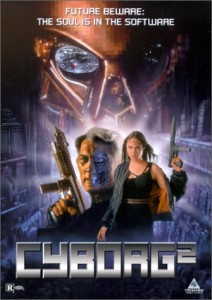 Apparently Angelina Jolie laments her role in this film, her first on the big screen.

It’s a little ironic that the lifeless and emotion free woman we see today saw her first onscreen action as a lifeless cyborg. It’s also unfortunate for Ms Jolie that this film isn’t awful enough to deserve oblivion.

It is 2074, and cyborg production is big business. They perform rote tasks, menial jobs and there are even extremely lifelike prostibots – the fact that these robotic hookers aren’t called this is an opportunity missed in my eyes.

Cash (Jolie) is a teenage-in-appearance exploding assassin, an aesthetically pleasing robot designed to be granted access to the headquarters of another robot making firm’s management – where she will literally explode during intercourse.

Apparently this will take out the brains trusts of competitor’s firms. Apparently these firms haven’t yet worked out how to build hot pleasure-bots of their own…

Tenuous premise established; Cash embarks on her journey through the impoverished slums that pass as post apocalyptic cities. She has Colt (Elias Koteas), a human who knows full well that Cash is a cyborg but totes wants to sex her up anyway, by her side, and the disembodied lips of Mercy (Jack Palance) appears on almost every electronic device through the city to ham mercilessly. Every TV and screen they pass flickers to life to spout rubbish in the name of providing the film with ‘colour’.

Seemingly surplus to proceedings are two other assassins. One another over-acting ham, the other a shapely female who I have already forgotten.

Now I can’t be sure that this was planned, but Jolie is perfectly cast as a shapeless robot lacking the ability to form her own thoughts. Her acting out of a program malfunction in her system is as hilarious as it is forced.

Cyborg 2 constantly reminds you that it is lowest of low budget. The costumes, the sets, and above all the acting prove no real money was spent here. Still it is occasionally guilty fun, and slightly better than the cash-in sequel to the low budget Van Damme effort needed to be.

Final Rating – 6 / 10. Moderately tasty mutton dressed up as lamb, like Angelina herself.