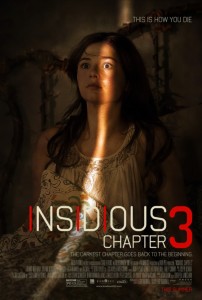 Of course a franchise has every right to take itself more seriously than you the casual viewer does, but I always find it amusing when a middling (at best) series begins with a preamble that assumes you remember anything about the first couple films…

In any case, Insidious *ahem* Chapter 3 takes place prior to the shenanigans at the Lambert’s home, which I later learned was where Chapters One and Two took place.
As the film opens Elise the psychic is non-practising, her sage advice to young Quinn when approached for help is “Talking with the dead is like a party line, you might want to talk to one specific entity – but all can hear”.

Quinn only wants help. With her mum passing away from cancer, high school finals approaching and a well meaning but out of his depth single dad (Dermot Mulroney) and a doofus younger brother, she needs guidance more than ever.

Someone should have guided her off the road, because it is when hit by a car in the middle of the night that Quinn passes momentarily to the other side, and during her lengthy and painful rehabilitation she quickly realises that she may have not returned alone.

Of course she didn’t. And as tends to happen in these films, her spectral stowaways are gravity defying, lock ignoring, dirty footed nasties – all with their own signature stinger music to ensure maximum BOO-POWER!

Unlike the first two films, which I only recall as having the busiest and least subtle ghosts on film, this seems far more deliberate and better paced. With the inevitable return of Elise to the fray comes the pair of douche ghostbusters, indulgent distractions that threaten to cast the film into the dreaded ‘grey area’ of mixed returns, where they would sit beside the other two films. But not this time. Not even the stupid Mr T mohawk and He-Man shirt could do that. Which I guess is saying something.

Insidious still relies on things jumping from offscreen and stabs that are more musical than impaling, but for what it is (teen friendly popcorn horror) this is the best it could be.