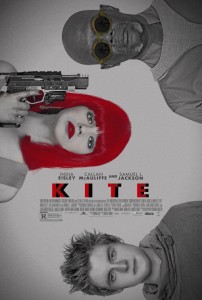 In a future city reminiscent of the pages of Dredd (I made that observation before I discovered that they actually used the discarded sets from the pretty terrific Dredd reboot of a couple years ago.)

Sawa (India Eisley) is a fragile little thing. With a coloured wig on her head, vengeance in her heart and a thin cracker in her belly from her most recent meal last week. She uses her female charms to infiltrate deep into the strongholds of human traffickers so that she might dole out retribution. One scumbag at a time.

Lieutenant Carl (Samuel L Jackson) is a cop. He keeps an eye on Sawa, covers up the traces of her hits, and feeds her information that assists with her next target. This information is especially valuable, as Sawa is hooked on a future drug that – among other things – attack her ability to retain memories. Sawa knows that her parents are dead, but the fine print concerning how, when and why elude her.

I don’t like present or future drugs, but this film presents a strong argument for the merit of substances with mind erasing properties. Sawa is yet another vengeance waif hell bent on wreaking havoc in a predictable and uninspired way; hers tends to be various forms of impaling.

But this whole ’emaciated girl turned killer’ thing is already very old. Violet and Daisy, The Scribbler, Hanna, Colombiana, I guess Everly – though Salma was perhaps never a ‘waif’ – and using the ‘based upon the anime’ is similarly clichéd, especially when it is as watered down as this.

Sure the violence is violent. There is onscreen blood and implied sexual connotations, but this feels like something with all the rough edges filed away, when perhaps the rough edges were what actually provided the texture, character and charm. Five minutes of research informs me that the anime was far more *AHEM* ‘adult-oriented’ with regard the sexual themes. That is definitely not the case here. Just a thought, but maybe removing the primary asset might be like trying to sell non-alcoholic beer…

India Eisley is a name I am unfamiliar with. Here though she proves there is only a small gap between ‘vulnerable’ and ‘unremarkable’. Samuel L Jackson doesn’t help either, coasting through his scenes as if this is just a stopover in between Marvel cameos. Being saddled with an all too familiar script doesn’t help.

I never read the Kite comics if they existed, nor saw the anime versions, but this film seems to have cropped off vital components and diluted away some of the primary assets. Either that or it is just a shit film based upon a shit cartoon.

Final Rating – 5 / 10. Another misguided film to prove the comic book is better than the film.