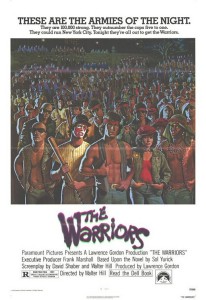 The Warriors might be seen retrospectively as a seminal moment in films representing the ‘urban environment’, but to my non-rose-coloured-glass-covered eyes, it is a Benny Hill soundtrack away from being a kitsch comedy. Even though Walter Hill wants it to be seen as a ‘Greek tragedy’ plot played out by street gangs.

The Warriors are a small crew numbering maybe ten, with about a 50/50 mix of white and coloured guys. Everyone kinda gets along, even though some guys obviously ruffle the feathers of others easily.

It is at a weapons free mass gang meeting, held under the white flag of truce and intending to unite all the poor and impoverished gangs against the common enemy, namely the police, that the magnetic and charismatic Cyrus – the spiritual leader of scumbags – is shot and killed.

The Warriors are blamed, and for 80 minutes or so they run, pursued by police, vengeful gangs, and the actual perpetrators of the crime who prefer that the fact not become public knowledge.

By itself that sounds cool, but the gangs. Oh the gangs. Obsessively themed and costumed, there seem to be mimes, baseball players and elsewhere a kaleidoscope of awkward colours and motifs. Most people join gangs to feel loved and avoid the exposure and persecution of being alone, these gangs deserve to be bagged mercilessly, and who would want to join a group who think it cool to unite under the garb of say, one specific Village People member?

Anyway they run. Occasionally they are held up momentarily by one group or another. Or the police. Or are waylaid by public transport. Or petrified by a guy singing badly and clinking bottles together. They run through alleys. They run to and from trains and buses. They run dragging a girl, or being dragged by a girl. It’s all very linear and, as someone who obviously wasn’t the right age to embrace this film upon its release, slightly tragic and comical.

Sure The Warriors’ influence continues today, primarily in rap music and quotes. But quotes are short and in the wrong context misleading. A great genre defining film needs a lot more than this.