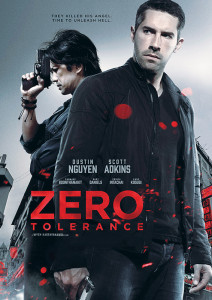 Smart marketing some guy. Sell me a movie promising vengeance, martial arts, nudity and Scott Adkins, then give me a limp movie featuring only the smallest amount of those things hidden behind one of the non-Johnny Depp 21 Jump Street guys. The tv series, not the movies…

Someone killed the wrong hooker. Angel is dead. Two equally determined, equally angry men scour Thailand for answers to her death. One is her father Johnny (Dustin Nguyen) – although he has not seen Angel for a while and is initially not even aware of the path she has taken. (One possible theory is the descent into depravity began when you named your daughter Angel?) The second man is Steven (Scott Adkins), Angel’s boyfriend and would-be avenger, though we won’t see much of him. This was more a four day expenses paid holiday in Thailand for Adkins than a film credit, such is the brevity of his role.

Instead we follow Johnny and a local cop through the nightclubs, alleys and more nightclubs as he searches for the truth.

Mostly, you keep waiting for something to happen.

Final Rating – 5 / 10. That last sentence probably encapsulates Dustin Nguyen’s career since Jump Street ended in 1991, and is the primary reason he agreed to this waste of time.