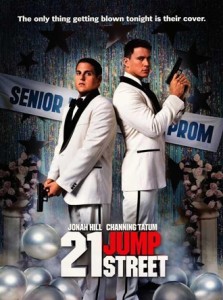 This is not a typical Protest Review, mainly because in the ordinary scheme of things I would have eventually gotten around to watching 21 Jump Street at some point.

But on this occasion I was forced to watch it by my wife, who vetoed my suggestion of checking Kick-Ass 2 at the cinema in lieu of watching this on DVD.

With no other interested sidekicks on the night Ass-Kicking will have to wait (not long if I have my way), so let’s see if this reimagining of an 80s TV series that no-one was calling out for makes the grade as a Plan B.

Schmidt (Jonah Hill) is not handsome, not athletic… And dumb.

Amazingly enough they are both cops, and like Jack Sprat and his hefty missus between them both they can tick off most of the boxes required to Serve and Protect.

But based upon the evidence in this film, they’re both still dumb, and as beat cops they make awful bike cops, leaving Head Office scrambling to find some place to hide these unlikely law-keepers.

In between swearing a lot (they all do, but he does it more), their new commanding officer Ice Cube (he’s named something else – but he’s no one else but Ice Cube) assigns Jenko and Schmidt to a local high school to find a new super drug that has emerged from nowhere to already kill one student before it spreads to other schools.

As an example of the level this film works at, the drug is called HFS, based upon what the user says immediately after use. Without spoiling the ‘big surprise’ I will at least say that the ‘F’ indeed stands for what you might think it does.

So does the S for that matter.

Our two heroes are given new identities as Doug and Brad McQuaid. (Yep, Jonah Hill and Channing Tatum are brothers – Tatum must’ve hidden all his brother’s exercise equipment when they were children). To keep the ruse authentic they are even ordered to live with Schmidt’s actual parents – no thought needs to be given as to why their surnames differ from their ‘parents’…

Doug (Tatum) and Brad (Hill) quickly find that even a mere 7 years after their former graduation, things done changed. In this New Skool new school things are topsy-turvy, smart and caring is cool, and macho and handsome is somehow totally not.

This suits geeky and eternally unpopular Brad, but Doug finds the new surroundings as somewhat of a hard landing. Their task to infiltrate and find the source of the drug is made harder when Doug and Brad inexplicably switch identities to protect their cover in front of the Principal, leaving Channing Tatum in physics class hanging out with nerds and Jonah Hill the drama class and sporty one. Schmidt even gets in trouble with his parents. Oh the ironing is delicious. But not really.

Of course this means Tatum is shunned by the cool kids and Hill is accepted instantly as one of the elite, and of course it all comes to a head at the prom.

21 Jump Street is surprisingly funny and fairly inventive, though in the early stages it settles way too often for potty talk instead of jokes. Perhaps not so surprising is that Jonah Hill’s already tired ‘I’ll whisper silly things under my breath’ shtick plays second fiddle to Tatum’s willfully silly Jenko. He proves unguarded and quite adept at physical comedy, and more than willing to make himself the butt of many jokes.

There are also some minor roles and cameos that actually add laughs instead of merely name value or recognition, and special mention to a car chase on a freeway that could hardly be called flowing, where several things that would ordinarily explode in such a film shock the lads by not meeting genre expectations.

Although puerile and patchy in the early stages 21 Jump Street mostly stays in that middle ground between inspired and insipid. After the early teething issues it is consistently amusing and self aware without ever settling for parody. I am one guy that thinks Jonah Hill is not the comedic genius he was made to be after the excellent Superbad, but 21JS is right in that wheelhouse, and he is given a partner that is pleasantly amusing and likeable.

Even though no one was crying out for a film version of an 80s TV show more famous for being Johnny Depp’s first regular gig, 21 Jump Street is actually one of the better comedies of the past 12 months, and I can see myself checking the inevitable sequel in 18 odd months.

Final Rating – 7.5 / 10. Because where else will you see Channing Tatum play a beefcake jock, Jonah Hill an overweight potty mouth and Ice Cube an angry black guy who swears a lot?