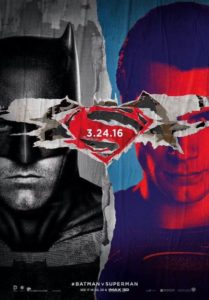 It’s been a long while; probably the days of Roman gladiator fights, since a ‘to the death’ battle was waged by two guys wearing capes. I just hope it is as long before this is inflicted upon us again.

For some reason (that these two and a half hours can’t explain convincingly) superhero types Batman (Ben Affleck) and Superman (Henry Cavill) don’t get on. We all know their respective reps; Superman is too strong to be controlled. Batman is too vigilante-ish for our PC society. Both don’t want to be in the public eye – hence their natty disguises including Clark Kent’s famed ‘glasses’ subterfuge – yet both want to be seen as the Top Dog in non-sanctioned law enforcement…

It’s all very confusing. Nearly as confusing as why this film exists in the first place.

Either Director Zack Snyder realised – or he was told – that he doesn’t have the control of narrative or tone that Christopher Nolan. So he obviously made no attempt to craft a believable environment nor a plausible tale that would elicit wonder and awe…

But whatever brief he chose or was given, it’s not only the director that has lost the plot here.

In clumsily rehashing moments from the last decade or so of Batman and Supes’ cinematic adventures Batman v Superman: Dawn of Justice brings nothing new to the superhero table. In fact the only remotely interesting moments in the first hour are the bad dreams that plague Bruce Wayne, and as I have always said if the best bits in your film are dreams or nightmares – then the reality in your film is lacking.

But there’s ninety minutes to go.

The only decent fights in Batman v Superman are CGI infused and very Marvel-lous, and I mean that in the way that suggests they have ripped of Marvel films’ style, something that Avengers 2 proved was something most of us are simply ‘over’ anyway.

The supporting cast are all well known but are here more for ‘street cred’ than for ‘value add’. Amy Adams is headstrong reporter and Supes’ ladygirl Lois Lane. Larry Fishburne is the editor of the paper that Lane and Clark Kent (remember the glasses?) work for. Holly Hunter is a senator who wants to control Supes’ and Jeremy Irons is Bruce Wayne’s assistant Alfred. Oh and Wonderwoman is here as well, as is her civilian alter-ego who looks just like her.

But I can’t recall any of them having a ‘moment’ worth mentioning or a line worth quoting. Not that the rest of the film is Shakespeare, Zack Snyder never read a story he couldn’t ignore or a line of dialogue to make a character or a scene immortal.

Which brings us back to the pair of superheroes who would/should be allies. You can tell they don’t like each other just by the poster. Look at those clenched fists! Wonder how Batman’s mortal body seems far more cut than Superman’s!

Instead of battling each other, their greatest foe here is a baffling plot that goes everywhere and nowhere simultaneously. The film yet again demands universal stupidity to drive events, namely the laughably easy framing of a formerly good guy who instantly becomes public enemy #1, and if that isn’t bad enough within minutes said ‘once-good-now-bad-guy’s’ girl is then taken to lure him out of hiding. Seriously? Instead of taking superhero films forward, Zack Snyder seems hell-bent on taking – and setting – the genre back decades…

So we get a superhero infused rock video that goes for two plus hours laced with rip-off battles, baffling cameos that go nowhere (in this film at least) and two lead heroes who are hardly representative of the legends that built them. Henry Cavill plays more the Man of Wood than Steel, such is the charisma that he exudes, and Ben Affleck’s demeanour throughout Batman’s astonishingly bland character arc in this film suggests he read the critic’s lambasting reviews prior to even donning the cape and cowl combo, such is the pain and anguish on the… bits of the face that we can see.

The only character who leaves any impression is Jesse Eisenberg as Lex Luthor. And that isn’t a good thing by the way. His Luthor seems to want to channel the manic energy of Heath Ledger’s Joker via someone with Idiot-Tourette’s. He seems to laugh at every bizarrely lame line before he delivers it, then giggles away as if it is just another in an endless line of zingers. Not only does he not have a decent line in a film where he has so many lines, he doesn’t have a moment of worthwhile energy, much less a scene.

I like Eisenberg as an actor, but here he ends up coming across like that poor guy who didn’t think to bring a jumper to a long winter walk and is so very cold but refuses to admit it, instead he shakes, sniffs and giggles to mask his pain. But we all know. We have no need for such a defence mechanism, but we are embarrassed for him nonetheless.

Where does this leave us? A film with a dull, contrived and derivative plot, stolen action sequences, two stars who don’t shine and a supporting cast who are kept in the dark; aside from one guy who seemingly is trying to sink the film every chance he gets. A laugh, wow and gasp free zone about two fictional superheroes who have no plausible reason not to get along in a film that has no reason to exist.

Final Rating – 5.5 / 10. If this is the response to the Avengers juggernaut then it is certainly off to a decidedly un-super start.