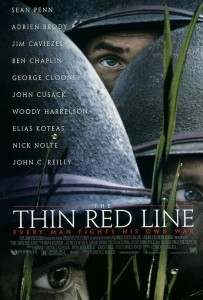 I am too much of an amateur hack to give such serious subject matter the respect it deserves, and too smart to make silly juvenile jokes about an arena full of death and sacrifice.

So this will be a short review about The Thin Red Line, a film made by Terrence Malick and starring two thirds of Hollywood.

Centring on a pivotal operation to take the island of Guadalcanal, thereby preventing the Japanese from using it as a valuable supply route for their troops, still trying to push further south to take more area. The campaign lasted just over 6 months, with the movie just a tad shorter at three or so hours…

With a large landing force and a fair degree of disarray and confusion, we meet many men of various ranks through the film, with many played by household names including Travolta, Nolte, Penn and Cusack, as well as many other experience character actors.

The plot continually finds its way back to Private Witt (Jim Caviezel) a ‘reluctant’ soldier who laments the abhorrence of war from the inside.

The backdrops and serenity of the peaceful moments are too beautiful to be associated with the ugliness. A dreamscape within a nightmare. The film switches between characters with ease and no allowance for a linear plot. As we meet these new soldiers many have the opportunity to provide voiceover narration of their own, some are blunt and logical, others more pensive and wistful.

It is 45 minutes before a shot has been fired, and despite being a ‘war film’, only two real battles to speak of. Both show the true nature of war from all angles, the blood, courage, fear and ultimately futility. Once close quarters combat begins the switch is sudden and brutal.

In war honour and nobility come after the disgusting reality of bloody violence. The Thin Red Line seems to separate these sides…

Final Rating – 8 / 10. A powerful and poetic examination of battle from no specific viewpoint or bias.