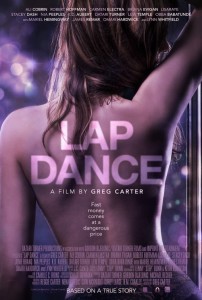 For Monica and Kevin the equation is simple; they need money to keep their apartment, their power is to be switched off and Monica’s deathly ill father requires top level care, and Monica has these tig ol bitties…

Right. Now we’ve ticked off the clichés, Monica can get down to business – and her undies.

Like every strip club, Lap Dance is full of bad music, smoke, sleazebags, young women who have been ‘paying off their tuition’ without ever attending a class, and older women desperately trying to stay relevant. Carmen Electra plays the prime example of this, both on and offscreen, she is 200 miles of bad road.

The laughable and tired plot, that is, the bits they hacked up to justify the awful strip club sequences, has Monica instantly becoming successful, making oodles of money and attracting the attention of a handsome and powerful music producer, despite never seeming to actually get her gear off. Monica loves the attention. Kevin doesn’t. The other strippers resent her. Blah, blah, blah why do I fall for terrible films with clickbait titles?

Final Rating – 5 / 10. Like a trip to a strip club after a big night on the town, none of this is even remotely a good idea.