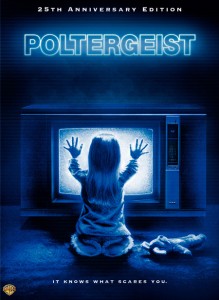 "Come out Wiggles. I need you!"

If Poltergeist taught an entire generation it must be that Eddie Murphy was right. If 4% of all the freaky shit that occurs to the Freelings happen in your home GTFO.

The Freelings are your typical all-American family, Dad, Mum, 3 kids and a dog. And a clown toy.

The unpleasantness starts with little more than white noise emanating from a TV and a cute little blonde girl saying ‘Theyyyyy’rrrre heeeeeeeeeeere’. The whole family watches on, but no-one thinks this is especially odd or bothers with many follow up questions.

Then more stuff happens. Small stuff. Bent cutlery. Dog tricks. Funny noises. A chair moves across the room seemingly of its own volition. Mum cheers it on.

But ‘stuff’ doesn’t gradually escalate. Within days the tree in the yard tries to eat the boy. The closet becomes a black hole which kidnaps the youngest girl and plonks her in the TV.

OK think the parents. Now we’re serious. A crew of olden day ghostbusters is hired to extract the girl from the TV. They find a lot of evidence. One of them eats maggot infested chicken and peels his face off in bloody chunks. It turns out these are visions only. He leaves anyway.

A medium is brought in. A creepy diminutive helium voiced woman who is perhaps creepier than anything else in the house. Except the clown. I hate that fucking clown.

Final Rating – 7.5 / 10. Although I am amazed that this was rated PG given a couple of the more choice scenes, Poltergeist is now fairly tame – at least when compared to your torture-porn or the Real Housewives of… Anywhere.

I think that it is hilarious that after all that goes on ultimately it is the house that leaves town first with the Freelings still in the driveway. Even haunted bricks and mortar took the hint before those morons. Sure the kid was in the TV, by all means take the TV with you. Anyway the kid was what 5, they couldn’t be that attached to it.