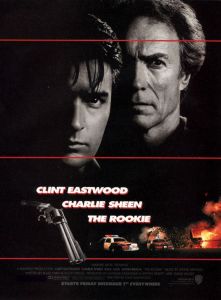 David Ackerman (Charlie Sheen) is a rookie cop, wide eyed and wet behind the ears. A son of money and privilege, he has joined the force to make a positive difference in the community. Nick Pulowski (Clint Eastwood) is the grizzled veteran, the type who resents both authority and inexperience. The rule book is a distant memory to Pulowski, something the weak and doubting refer to when lacking in conviction.

So teaming one with the other is a recipe for disaster right? Especially with the pairing being forcibly imposed after the murder of Nick’s previous partner at the hands of devious car thieves.

After a lengthy ‘getting to know each other’ introduction the film becomes something of a lengthy chase sequence. Everyone knows Strom (Raul Julia) murdered Nick’s partner, he hardly hides from the allegations, and as is standard in these films they run across each other’s paths multiple times in only a few days, with the barely restrained loathing and hatred heightening tensions.

The Rookie unfolds over a languid 120 minutes, even the fight and chase scenes seem slow. It’s strange to remember that there was a time when Charlie Sheen is the straitlaced bland guy and Clint Eastwood the wild haired hellion, but nonetheless that’s where this film starts.

I remember watching this as a teenager and wondering where the ‘wow’ was. Another quarter century of maturing and experience later and my thought process on this film hasn’t changed. The Rookie isn’t a buddy cop actioner, but for long periods it sure looks a bit like one.

Final Rating – 6.5 / 10. An early buddy cop movie from the era where the genre was finding its way, made way before Charlie Sheen lost his.