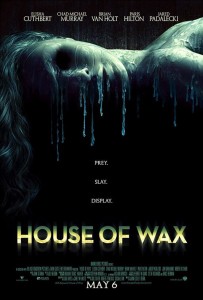 A uniformly obnoxious carload of twenty-something mediocrity embarks upon a road trip to a college football game.

The inside of this small town looks a lot like the empty vastness outside, only with more man made vacant structures. Every building seems uninhabited and unlocked and our ‘heroes’ wander around casually, looking through homes and businesses and touching stuff…

Don’t they know what happened to Goldilocks?

In one of these buildings – the House of Wax – they find a bunch of stuff made from… wax. The human characters most of all seem eerily lifelike, which is ironic given Paris Hilton is in the cast and seems more waxen than any of these petrified statues.

Every second Paris Hilton continues to exist is proof that we live in a flawed society.

The wax might be a hook, but it is hardly a strong enough stuff to hold up a threadbare slasher plot. So the film settles for a routine of separating the cast, punishing them for sex and generating forced screams and tears.

The House of Wax exists in the Scream universe. It is like bran, neither good nor bad for you, just something to do to fill a short while until something tastier comes along.

Final Rating – 7 / 10. Slashers aren’t really my cup of tea, but this is a competent showing.