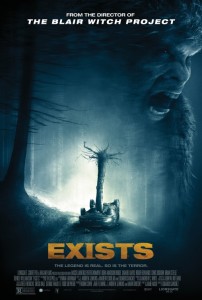 This time around five of our favourite nubile Americans venture into the deep backwoods, to a family owned cabin that no one can work out why it isn’t used more frequently.

Things start quietly, some low key orienteering, some mountain biking, a little extreme action to film for the folks what watch the ‘pooters. Then someone goes and pisses off the neighbours.

In a short stay this ordinarily wouldn’t be something to fret over, but these neighbours are eight foot tall and covered with matted dense hair. They are also astonishingly quick through dense forest, in fact capable of moving past a skilled rider at full speed on a bike going downhill with a clear track ahead. Fast.

With disgruntled neighbours this pissed off and enjoying home field advantage, it would seem no number of cups of sugar will buy forgiveness.

Because they are young, these kids film everything. Regardless of whether they are lolling about or running for fear of their life, the images are crystal clear, except, when the Big Fella is on the screen in any way. Maybe Bigfoot really is blurry in real life?

Exists wants to claim much in common with the all too neglected Troll Hunter, a fiendishly clever and funny film that examines the reality of those mythical beasties. Only this film isn’t nearly as inventive, witty or creative in bringing the creature to our world.

Maybe the budget here was lower, but as I have been saying frequently of late, if you can’t do it with what you have, either wait or stop altogether.

Final Rating – 6 / 10. This film Exists, but on the blurry evidence here that is not especially meritorious.